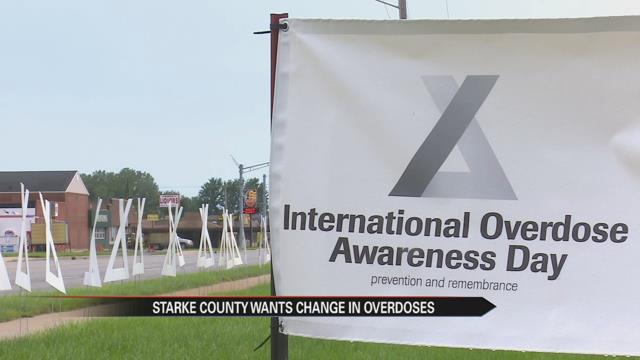 The group was founded back in 2012 after finding out the county had the 4th highest rate of drug-related deaths in Indiana. This year—that number is down by more than 50-percent.

“Sometimes I don’t understand why I’m here, and a lot of my friends are still in their addictions,” said recovering addict Nichole Dixon.

56 people overdosed and died in Starke County in the past seven years.

“Had the overdose deaths not occurred, our health rankings would have been much greater, because these are people that are dying at a pretty young age,” said Jordan Morris, a Moving Starke County Forward coordinator.

In 2011, Starke County was ranked 91st out of 92 counties in Indiana for overall health. 50-percent of that ranking comes from Premature Death Rate and Starke County once again topped the list of drug-related deaths in Indiana at number four.

“I know a large majority of the people on these ribbons,” said recovering addict Michael Hoekman.

These ribbons signify the number of people who overdosed in Starke County in the past seven years.

“I lived with a lot of people on those even. It’s a sad thing, because here I get to continue on with my life, and I got high with a lot of those people, and I made it out. They didn’t,” said Hoekman.

But from 2014 to 2015, the average fell to four deaths a year. Moving Starke County Forward hopes that’s because more people are conquering their addictions.

Sometimes, that makes a loss even harder.

“Before it was just part of the game, and now it hits more close to home when it’s someone that you love, and you’re actually going through the emotions of the loss,” Heath said.

“There’s a persona in this community about drug addicts, and it needs to change for the community to get better,” Hoekman said.

Hoekman said when drug addicts are looked down upon, they feel like they don’t even have a reason to recover.

“There’s a fine line between tough love and still being there to help people. You can’t recover alone. You need a support system,” Hoekman said.

And that’s why events like this one are so crucial to preventing more ribbons from being needed.

“Don’t give up on your son, your daughter, your brother, your sister, because I know they’re killing you, but they’re killing themselves, too. Maybe one day, they might change, and that’s all you have to hold onto,” Dixon said.

Last year, Moving Starke County Forward had to put up 61 ribbons. So the group says they’re making progress, but they hope that one day, the lawn will be empty.