State, County: Marinas are on own to pay for dredging 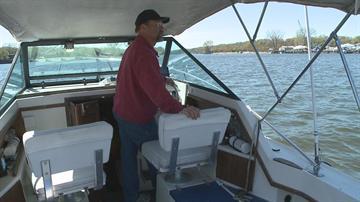 SAINT JOSEPH, Mich. - It could be mid-July before hundreds of recreational boats are able to access Lake Michigan.

An area of the St. Joseph River is closed off by sand. Plans to privately fund dredging were put off Monday because  more equipment will be needed and the expense will be more than initially thought.

Recreational boats drafting more than 3-feet of water are having a difficult time accessing the lake without hitting the bottom. Boats from four St. Joe/Benton Harbor marinas and two public boat launches are affected.

If funding is found and the work complete by May 1st dredging can’t be done until at least July 15th because of state fish spawning regulations.

“That stalled my engine right there,” Brian Jewell, owner of Brian’s Marina in St. Joseph. Jewell hit the sandbar in his 23-foot boat in the marina Tuesday.

The 300-foot sandbar in the river is so shallow Jewell estimates half of the boats at his marina will be stuck in port this summer.

“Here’s what you got right there,” Jewell said measuring the depth with a fishing net. “Two-and-a-half, three-feet.”

Jewell estimates about a thousand boats that usually use the waterway in the summer would be seriously damaged by these conditions. “This little 23-footer just bottomed out and killed the engine,l” he said. “That sand goes thru the engine, over heats (and) it not a good scenario.”

It’s tough for Jewell to imagine it like this half the summer.

“It would be a relatively significant impact if we can’t have half or more than half of our boating activities happen in St. Joe,” said State Representative John Proos Tuesday.

Proos said recreational boating is a big issue but marina’s need to deal with dredging on their own. Since the 90’s, government funding stopped for clearing recreational waterways.

There is no emergency funding available for dredging “It’s something we need to quantify in the future and see if it’s something people of Michigan want to (fund),” said Proos.

Dan Fette with Berrien County Community Development said commissioners will not fund dredging for commercial boating because private marinas are the ones affected.

“I think there should be a continual process of having the river dredged,” said Jewell.

Jewell said taxpayers should be on board. “We know they’ll go elsewhere if they can’t boat comfortably in this area.”If boaters leave so do a lot of tourism dollars.

According to Berrien County, other lake communities have a tax program to pay for harbor maintenance but St. Joseph/Benton Harbor does not.

Fette said the Michigan DNR could give permission for some dredging during the fish spawning season if a plan was in place.