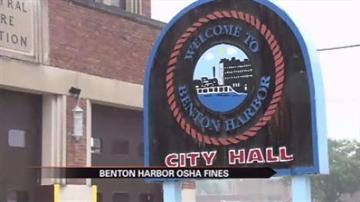 BENTON HARBOR, Mich. -- The Michigan Occupational Safety and Health Administration has fined the city of Benton Harbor $10,000 for public safety violations related to procedural failures in the fire department.

According to the state documents, state officials conducted inspections between March and May of 2013.

The report outlines the violations found in the fire department.

Three of the citations relate to the lack of proper training for firefighters and emergency responders.

The fourth citation is for equipment problems.

According to the reports, some of the respiration gear is past its 15 year lifespan. Other devices haven't been getting the necessary five year inspections.

We reached out to the emergency manager, the public safety director and the mayor's office in Benton Harbor.

Emergency Manager Tony Saunder's spoke with us after this story aired. He told us he was able to negotiate the fines down to $5,000. The fines will be paid off in one lump sum on July 3rd.

State officials said the fines and violations must be taken care of By july 29th.