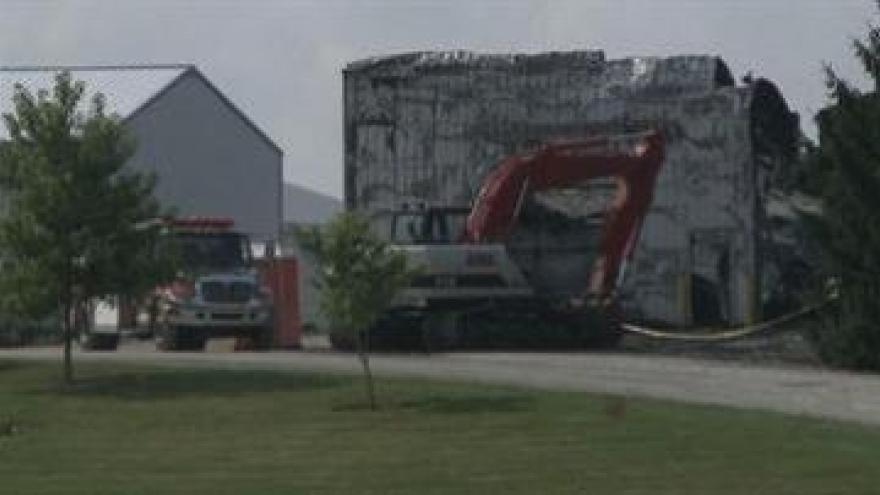 NEW CARLISLE, Ind. -- The State Fire Marshal is investigating the fire at K-Fex, Inc. that claimed the life of Assistant Chief Jamie Middlebrook of the New Carlisle Fire Department. Investigators say they are still working to determine a cause.

Firefighters and witnesses on scene reported at least one explosion. At some point the roof collapsed.

While fighting the fire, two firefighters couldn't be located.

One of the firefighters emerged injured.

"The injured firefighter was Matt O'Donell. He had a fracture to his right ankle. He was treated and released at the hospital. He has three years with the department," said Robert Johnson, Assistant State Fire Marshal.

His partner, Assistant Chief Jamie Middlebrook, died in the barn.

The Allen County Coroner says Middlebrook died of blunt force trauma and a broken neck when the roof collapsed.

All that's left of the barn is rubble.

"Every fire has its own complexity," said John Erickson of the Indiana State Fire Marshal's Office.

Erickson says their agency and several others are attempting to determine the origin of the fire.

The cause of the fire could take days, weeks - or even months.

"In a lot of different businesses, there are chemicals or materials that they're using that are chemically treated - there are all kinds of variables that could be involved," said Erickson.

We contacted the owners of K-Fex, Inc. to see what materials they had on site and how they were stored, but they declined to comment.

K-Fex is an excavating and trucking company, according to their website. http://www.k-fex.com/

A neighbor says the company uses a significant amount of gas and welding materials.

Investigators have not entered the building because several insurance companies are still surveying the damage.

"We want to preserve evidence and make sure everybody gets the best look possible," said Erickson.

Erickson says investigators are looking at things like electrical malfunctions and chemical reactions, but won't know the cause of the fire until Friday at the earliest.