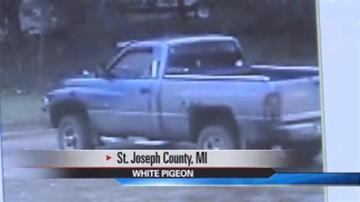 Over the last couple of weeks, this man has stolen everything from wood splitters to jet skis.

Detectives say he drives around looking for trailers he can easily hook up to and pull away with.

State police aren’t sure if he lives in Indiana or Michigan because he seems to be targeting both sides of the state line.

All they know is he’s a heavy set male driving a light blue dodge pickup truck with rails on the side.
Detectives say he’s targeting rural areas both day and night.

“He’s probably involved with a couple stolen vehicles in the area, but then there’s also been several breaking and entering into businesses as well, so it doesn’t seem like he’s stuck on any one type of crime. It’s more of a target of opportunity,” said Detective Todd Petersen, Michigan State Police.

Contact the Michigan State Police at 1-800-525-5555 if you have any information related to these crimes.