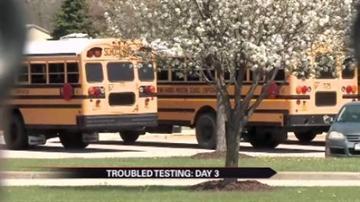 ST. JOSEPH COUNTY, Ind. -- After having trouble with the online ISTEP testing, the state asked school districts to give the online tests to half of the number of students as earlier in the week. Everyone seemed to comply with that request and testing went well on Wednesday.

So far, kids have been having trouble getting through this year's online ISTEP testing.

"Yesterday, with our students who were testing across the state, just 16 percent of the students were able to complete a section of the test,” said Dr. Kay Antonelli of Penn Harris Madison School District.

On Wednesday, the state asked schools to cut the number of kids taking the test by 50 percent and it appears that solved a lot of the problems.

"Out of our 11 elementary schools and three middle schools, three schools experienced some slowness,” said Antonelli.

But even with the success, administrators are still uncertain.

"It's not just the testing up to this particular time, it's the fact that we still have several days to go and don't know exactly what could transpire between now and then,” said Antonelli.

The question remains whether the state will leave things as they are or try to increase the number of test takers on Thursday.

"When we receive any updates from CTB or from the Indiana Department of Education, we'll make sure that parents also receive that, so that they know as much as we do,” said Antonelli.

She says it's not an easy or quick thing to do.