State troopers remind drivers to move over or slow down 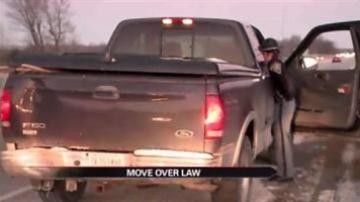 SOUTH BEND, Ind. -- Indiana State Police troopers are trying to bring awareness of the law that requires drivers to move over or slow down if a law enforcement officer is on the side of the road.

The law requires drivers to move over one lane if an emergency or highway maintenance vehicle is stopped. If drivers can’t move over they are required to slow down 10 miles below the posted speed limit.

She was helping a car on the side of the road when she heard a semi coming dangerously fast towards them.

The truck did not move over and actually drifted onto the shoulder.

“I had to basically dive over the front of the vehicle that I was trying to help. The truck swiped my arm and I realized the next day I had a slipped disk from it,” said Deal.

But she said she is lucky she made it back home that night to her three kids.

That's something that hasn't been the case for all law enforcement.

“So far 150 have been killed by a vehicle hitting them while they’re on the side of the road,” Deal said.

And now Trooper Deal is stopping drivers who disobey the law.

Those drivers will receive a $300 fine.

Deal said it’s not only a law but a common courtesy to help protect those who protect us.

Deal said she thinks a lot of drivers don’t know about the law.

It has been in effect since 2010 and is required in every state except Hawaii.