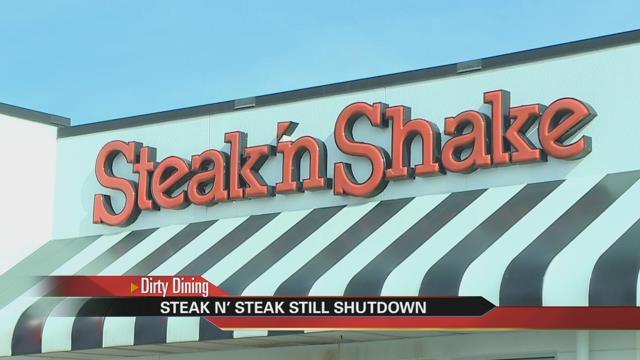 Dirty bathrooms, dirty utensils and unwashed hands making food are just some of the violations the health department has observed at the Ireland Road Steak 'n Shake over the past few months.

The St. Joseph County Health Department inspected the Steak 'n Shake Monday afternoon, to determine whether or not they could reopen after last week's closing.

The restaurant failed that inspection, and will remain closed for now.

Former customer Serge Romero says he used to eat there often, but stopped after getting sick after eating there.

“About 4 months ago and my daughter got me a treat and it was a double bacon burger and I was sick for about two days after,” Romero said.

It’s the kind of sickness Romero didn’t elaborate on.

“It was normal stuff that you would get if you had bad meat. So, it wasn’t pleasant,” Romero said.

He wasn’t surprised when the restaurant was shut down for repeated violations.

Since March, the health department inspections have shed less than appetizing light on the franchise.

One week ago, the health department saw an employee get to work without washing hands,

Three days before that, raw meat was recorded to be stored at fifty degrees or above,

These are following a report from September that said:

“Floors are filthy, tables were dirty. Restrooms were horrible. Looks like nothing has been cleaned in weeks.”