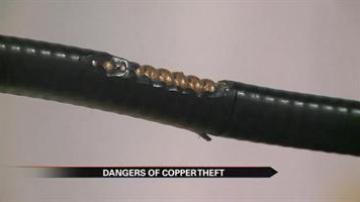 SOUTH BEND, Ind. -- Copper theft is on the rise in South Bend, according to Indiana Michigan Power. Company officials say the suspects often leave behind a mess that could be a safety hazard.

The thieves sometimes leave live wires on the ground, creating a safety hazard for workers and the general public.

"To just leave that wire, a member of the public could stumble upon it, one of our workers may not know about it and could hit it, so it just poses a lot of danger all around," said Tracy Warner of Indiana Michigan Power.

This summer, a man was nearly killed while trying to steal copper in South Bend.

Warner says no amount of money is worth risking your life.

"It is a lot of work, a lot of dangerous work for something that just doesn't pay that much," said Warner.

Not only is the process of stealing this precious metal dangerous-it can also impact your electrical service.

"Some of the wires that are stolen are meant to protect the power supply against surges, and if that wire is missing then those surges go through the power lines and could go through people's homes and could damage their electric equipment," said Warner.

Copper is worth just over $3 per pound, even less on the black market.