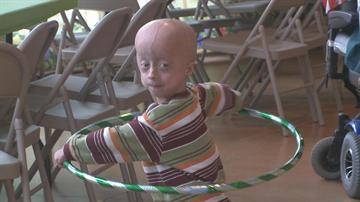 SAINT JOSEPH, Mich. - A Stevensville family is fighting one of the rarest diseases on earth and new clinical research is giving them hope for a cure.

5-year-old Cameron Howard is living with a Progeria, a rapid aging disease. Fewer than 80 children in the world are known to have Progeria and less than twenty live in the United States.

Sitting in his father’s lap, little Cameron’s eyes dart around the room with curiosity. Like any other 5-year-old he can’t still for more than a few minutes and can’t wait to do something different.

Something is different about Cam. His body has aged to that of a 40 or 50-year-old man and right now his life expectancy right now is just 13-years-old.

“Physically he’s getting older but mentally he’s like any other 5-year-old,” said Stephanie Howard, his mother.

Cameron’s parents, Stephanie and Jason’s journey started when Cam was 1-month-old. Cam was born normal but was having problems growing. “That was probably the hardest part for us,” said Stephanie. “Not knowing what was wrong.”

Diagnosed at 5-months, Cameron and the family was sent to the Progeria Research Foundation, a new foundation just starting to understand what causes the rare trait in children.

After trips to Boston’s Children’s Hospital, where the foundation works from, the Howards were linked with a support network of other families with children dealing with Progeria and were given a new drug trial to help prolong Cam’s life.

Back home the Howards, trying to help fund the research, began fundraising in Southwest Michigan. One of the most successful was an annual 5K run they began called KM for Cam. “We’ve been amazed with how much support we’ve received,” said Stephanie.

To date, they’ve raised about $150,000 for the Progeria Research Foundation and since Cameron started visiting the foundation has flourished.

In just 10 years, The Progeria Research Foundation has been able to find the gene linked to Progeria and soon Cam will be part of a new drug trial. “What we’re hoping for is that the drugs they’re currently working on now will prolong their lives so that they’ll eventually find a cure,” said Stephanie.

Saturday, Barbara Walters will air a 20-20 special on ABC 57 at 10 p.m. about Progeria and the disease’s affect on American families.