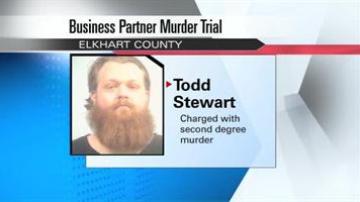 GOSHEN, Ind. --  Several people testified for the prosecution on the second day of the second degree murder trial of Todd Stewart. He is accused of shooting Mark Miller, then dumping his body in a barrel in the St. Joseph River.

Testimony included photographic evidence of Miller's body in the barrel and of his autopsy.

Jurors had their mouths covered and looked over at Stewart when some of the graphic photos were shown.

Stewart also turned away and did not look at the pictures of Miller's body.

Both talked about camping out overnight in the Goodwill parking lot across the street from where Miller's tattoo shop used to be, waiting to see if they could catch anything out of the ordinary.

Both testified to seeing Stewart and Miller's wife having a good time, drinking and partying in the parking lot of the tattoo shop just days after Miller disappeared.

Also, Stewart's cousin Robert Terry testified against him. He said Stewart came over to his house on the St. Joseph River a few times and inquired about the depth of the river and vented about problems he had with Miller.

Terry testified after Miller disappeared, he put two and two together and called police.

The doctor who performed Miller's autopsy also testified. Some members of Miller's family walked out of the courtroom so they couldn't hear the graphic details.

The doctor also testified that there was a black plastic bag over Miller's head, which suggested he could have been tortured.