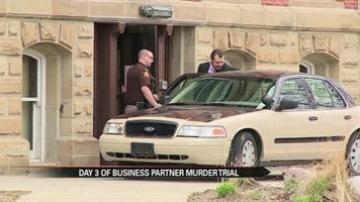 GOSHEN, Ind. -- In the third day of trial, a key witness testified against Todd Stewart, who is accused of killing Mark Miller in September 2012, then dumping his body in a barrel in the St. Joseph River.

The only known witness to the crime, Matt Howard, testified about the day Miller was killed.

Howard said after all of the clients left Millers' tattoo shop, he went behind the shop to smoke a cigarette.

He said Miller was behind the shop when he went back inside. Howard testified Stewart then went outside and he heard a loud slap.

Howard said he turned around and Stewart was standing there with a gun in his hand and said "It's done."

After the shooting, Howard said he worried he would be next.

Stewart told Howard to follow him out the back door. When they got outside, Howard said he saw Miller's legs hanging out of the barrel.

Howard says Stewart asked him to help lift the barrel and put it in the back of Stewart's pickup truck.

Stewart then allegedly threatened to kill all of Howard's loved ones if he told anyone about what happened.

Howard said he was in disbelief and tried to call Miller several times.

Defense attorneys have a different story to tell. They want to prove Howard actually pulled the trigger.