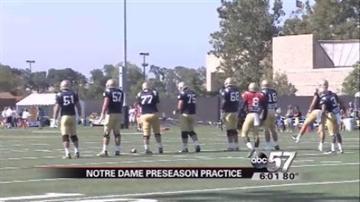 NOTRE DAME, Ind.-- The home opener against Temple is two weeks away and while things are falling into place for the Irish, there are still spots up for grabs, particularly on the offensive line.

Veterans Zack Martin, Chris Watt and Christian Lombard have been getting in lots of reps, and Nick Martin has stepped in at center now that Conor Hanratty's out with an injury.

So, could sophomore Ronnie Stanley see some playing time as a tackle? The verdict's still out, but Coach Kelly says Stanley has some quality characteristics he could bring to the line.

“He has all of those intangible traits and real traits of an offensive tackle that you’re looking for, and he’s got toughness. He’s a tough kid,” Irish Head Coach Brian Kelly said.

Outside Linebacker Prince Shembo says after going up against Stanley in practice, he agrees.

“He’s very athletic and has very quick feet and is always trying to get better. I like the way he’s looking,” Shembo said.

“I’ve gotten a lot stronger over this off-season and that helped a lot and just a lot of good footwork and just a mental set for the game and just knowing what I need to do, knowing where the ball’s going,” Offensive Tackle Ronnie Stanley said.

“He’s more comfortable at left tackle, but if we had to play him at any of guard positions or tackle positions, we could put him in and he could play,” Kelly said.

Speaking of freshmen on the offense, Wide Reciever Cory Robinson raised some eyebrows today catching some tough passes, so he could be another player Coach Kelly looks at to contribute to some big plays this season.