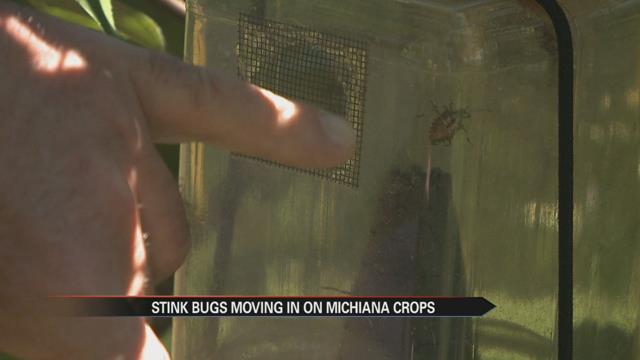 It’s that time of year when stink bugs start to move indoors.

While they're a nuisance for many homeowners, the critters are becoming a serious threat to Michigan’s crops.

For the first time, orchards and farms in Niles are starting to see the Brown Mamorated Stink Bug pop up near their crops.

He says the bugs have the potential to harm business.

“They’ll feed on the fruit and make it unmarketable,” Lecklider said.

From berries to apples, the bugs pick the sweetest fruits to ruin.

“It would be awful just to see all of the crop destroyed,” Lecklider said.

That is what Lecklider is working to prevent.

He partnered with Michigan State University to set up traps to catch the little buggers before they catch his crop.

On the front lines of prevention when it comes to the bugs, Michigan State also recommends reporting stink bug sightings by using its app, MISIN.

“I just really wanted to get a better sense of where are these bugs right now,” said Dr. Julianna Wilson of Michigan State University.

While farmers are working out their plans, experts say now is the time to prepare houses to keep the stink bugs out.

“Just seal up the cracks and crevasses. They’ll start gathering now here any day on the southwest corners of buildings,” Barry Pannuk, an entomologist for Franklin Pest Solutions said.