Stockton always ready to be 'next man in' 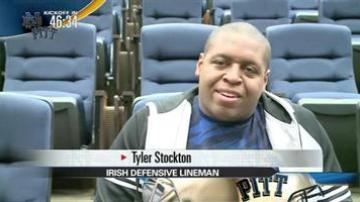 PITTSBURGH, Pa. -- At this point in the season-the Fighting Irish have suffered more than a few injuries and they've really had to test Head Coach Brian Kelly's philosophy of the "next man in."

Fifth-year senior and defensive tackle Tyler Stockton has always been there for his teammates both on and off the field. He has just one career tackle on the books but now is his time to shine.

Stockton had not planned to play for Notre Dame for a fifth year, but he's here. Coach Kelly asked him back because of the valuable leadership skills he brings to the team.

"We like the young man in terms of the locker room. He's a great kid, really like his personality, he's a team player," said Coach Kelly.

Leadership and a positive attitude seem to come easily to Stockton-and it's easy to see why his teammates look up to him.

"Some teammates come in and had a tough day or did bad on a test coming into the Gug, I mean this is the fun part now. The school is the hard part at Notre Dame. Playing football is the fun and exciting part where we just get to let loose and do something that we all love," said Stockton.

His mental toughness seems to come naturally as well-ready at any moment to be the next man in.

"Just being prepared, knowing what you have to do on the defense, knowing your role on the team, knowing that if somebody goes down, you have to contribute just the way they were," said Stockton.

Although he hasn't seen much time on the field, he says he wouldn't trade his experience at the University of Notre Dame for anything.

"It's what everyone thinks, it's a dream come true, it's a blast. I wouldn't want to go to any other school," said Stockton.

Louis Nix III is reported to be back to 100 percent after struggling with chronic knee tendonitis.