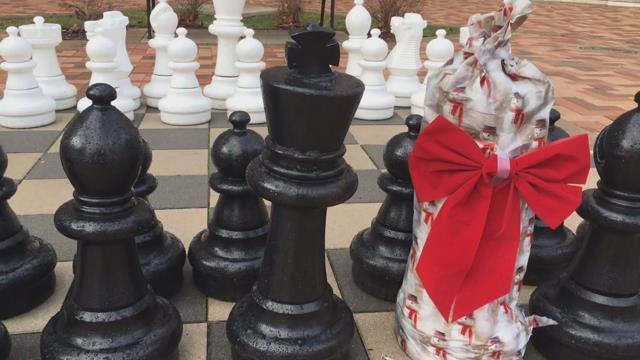 The queen of downtown South Bend has returned just in time for Christmas.

Almost three months after someone stole one of the queens from the city’s large chess board, an unknown person brought it back wrapped in a big bow.

DTSB employees say they were just walking into work and saw the queen wrapped up like a present.

Nobody knows who left the piece there.

“We put a report in and said if anyone happens to see our queen let us know,” Higginson said.

Higginson had thought it was game over for the missing queen, until Monday, when he saw the piece back on the board wrapped in a bow.

“It could be brand new, or we could’ve been gifted back our queen,” Higginson said.

Whether it’s a real life Grinch, who returned the queen after taking it, or a friend who bought a new one, Higginson has a message for the mysterious giver.