Store clerk fights off robber with 4-pack of beer 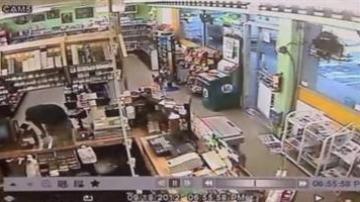 A Florida store clerk brought a four-pack of beer to a knife fight and won.

The whole thing is on this surveillance video. A man armed with a pocket knife tried to open the registers. The suspect grabbed a handful of cash, but the clerk was not having it.

He grabbed a four-pack of Natural Ice and hit the guy. Police arrested the suspect later at his home.