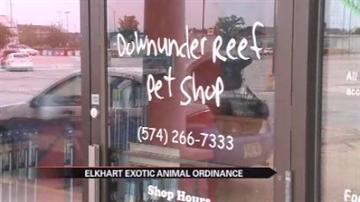 "We had a large clientele here. They didn't want to drive all that way to Granger," said Jessica Achberger, co-owner of Downunder Reef Pet Shop.

Achburger and her business partner Anna Morrow relocated the store from Granger to the North-Pointe Plaza in Elkhart close to 2 weeks ago.

"We have Bengal and Savannah cats, that's it. We do not sell our other animals. We have them for display purposes or educational purposes," said Achberger.

Morrow says her family has a wallaby, and a few other animals that are considered exotic at their Granger home. Achburger also mentioned she too has exotic pets at her Michigan home.

But contrary to recent popular belief, they both say they don't sell them at the store.

"They are our animals. We do bring them out every now and then to show people," said Achberger.

The city of Elkhart has an exotic animal ordinance on the books that states: it is unlawful for any person to possess, maintain or harbor on any property within the corporate boundaries of the city any exotic animal.

Which means it's illegal to even bring the animals on the property.

The Elkhart Humane Society's director admits the wording in the city's ordinance is confusing.

"The current city definition says an animal that is not indigenous to Elkhart County. Well that's kind of a conflict because there are breeds of dogs and cats under that definition that would be considered exotic," said Anne Reel, Executive Director of the Humane Society of Elkhart County.

The Humane Society says its crews pick up animals in the city limits when city officials determine someone is harboring what they believe is an exotic animal.

"When the city of Elkhart instituted their exotic animal definition there were snakes and some lizards and things like that that were brought to us," said Reel.

Reel admits they haven't had any calls about confiscating animals at Downunder Reef Pet Store.

The owners says they shouldn't be getting any calls either because the city issued their license just last month and they are not selling exotic animals despite what rumors may be out there.

We were not able to confirm whether Elkhart Animal Control is investigating because the city's animal controller Dennis Russel did not immediately return our calls.

Christy Holman the deputy city controller told us the city issued the permit for Downunder Reef on July 16th. She said the license does not allow pet stores to display or sell exotic animals.

The owners of the store told ABC 57 News they were planning to sell sugar gliders an animal they say they have sold for the past 2 years in their previous location. They both claim a sugar glider is not an exotic pet.

In fact to set the record straight they say they called their inspector with the USDA who issued their federal license last year. The inspector was at the store for a few hours meeting with the owners on Monday.

The USDA employee declined comment, however Tanya Espinosa, a spokesperson with the USDA did confirm over the phone that Downunder Reef was last inspected on January 10th at their Granger location. She said the USDA usually inspects facilities once a year.

According to www.sugarglider.com a sugar glider is a small nocturnal, arboreal marsupial native to Australia and Indonesia. Whether it meets the city's definition of an exotic animal is not determined.

Holman advised us to talk with Detective D'Andre Biller who works with the animal control division in Elkhart. Her voice mail stated she is on vacation until next week.