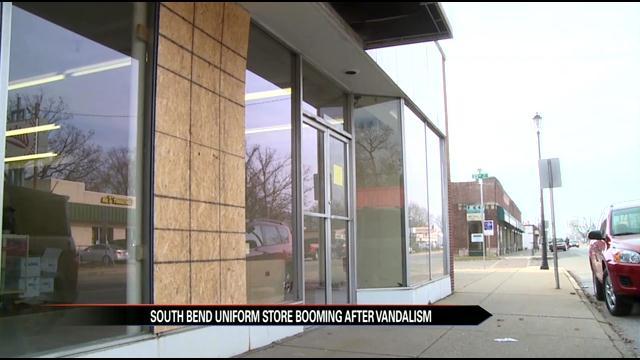 Abc 57 News first reported about a store called South Bend Uniform store, last week.  Since then, the store has been the center of attention for selling controversial shirts.

Friday night, the store was vandalized.  But the owner of the store and Mishawaka Police officer, Jason Barthel, says in no way did the vandalism slow down or stop production.  In fact, he says sales have really taken off.

“I had the intention of selling 200 shirts locally, this has grown to a global phenomenon,” Barthel told Abc 57 News, Sunday afternoon.

Barthel says when he started selling, “breathe easy” shirts, he had no idea he would be taking orders from people all over the world.  “The sales continue to come in they have not gotten any slower, internet sales are tremendous.”

It all started about a week ago, when the Notre Dame Women's Basketball team wore warm up shirts that said, “I can't breathe,” after the decision to not indict the New York police officer involved in Eric Garner's death.

That is when Barthel responded, wanting to show his support for police officers.  He started selling shirts that read “breathe easy, don't break the law”.

While filling orders on Sunday, Barthel explained, “This is something to bring our country together in such a hard, rough time as far as racial tensions at this point.”

Some city leaders spoke out last week saying the slogan adds fuel to the fire.  But Barthel says the point of this message has always been unity.

“I think people are starting to understand, it is not a divisive message, just trying to bring people together.”  Something was thrown through the storefront Friday night, shattering the glass, but Barthel says that hasn't stopped orders from coming in and shirts from going out.  “We are going to continue to spread this message of peace and unity and cooperation between police and the citizens.”

Police have not released a description of the suspects who vandalized the storefront.
Share this article: