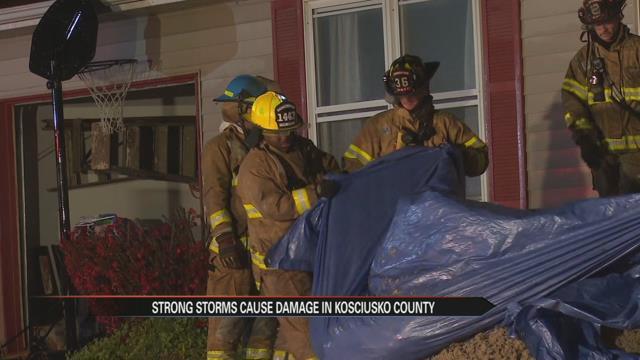 An emergency manager confirmed one person was injured when a limb fell on a car in Etna Green.

There were also several reports of downed trees and scattered debris in Syracuse.

Folks in Warsaw say they were hit by heavy rain and wicked winds, but overall they didn’t see severe damage.

“Small hole in the roof, ceiling pulled in a couple of the bedrooms so we can get the insulation out, other than that it was a pretty easy fire for us,” said Warsaw Fire Chief Michael Willson.

That easy fire for first responders was caused by an uneasy storm.

“As the lightning storm got into the area they did hear lightning, sounded like a very large strike, so they had a large clap of thunder,” said Willson.

One lightning strike struck the top of the home on the 200 block of Eisenhower Parkway.

And luckily everyone inside was just fine.

“Seems like just trees from the wind, and luckily this is the only lightning strike we know of,” said Willson.