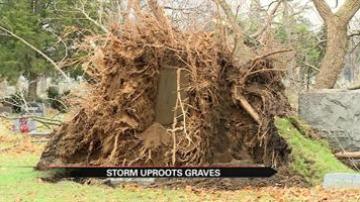 MISHAWAKA, Ind. -- Sunday's storms not only affected the living, they disturbed several graves at two cemeteries in Mishawaka.

At Fairview Cemetery on Main Street, the sounds of chainsaws filled the air in the normally quiet spot.

Crews at the cemetery say it will take four to five days just to chop down the downed trees. It will take longer to fix the vaults that were disturbed.

"Yesterday was probably the worst since I've been here for seven years," said William Baker, Foreman at the Fairview Cemetery.

The trees knocked down several tombstones and the vault lid of a 1914 grave was pulled out of the ground by a tree that was uprooted.

The two cemeteries sit side by side on Main Street.

Both will have crews working overtime to clean up the mess.

"I would have to give it about four good days of non-stop hustling around here," said Baker.

"It might take a few weeks to get this cleaned up here. The vault service is going to fill in these graves and then we're going to start cutting up this tree," said Eggleston.

Some of the graves at Mishawaka City Cemetery date back to the early 1800s.

"1836 it was started. We have Civil War people buried here," said Eggleston.

The vault lid that was unearthed is 100 years old.

It will require major repairs.

"They were in pieces. The modern vaults are much better, much stronger, more intact," said Eggleston.

Crews say they've seen a lot of traffic the past few hours, but it's not to visit loved ones.

"No I think people are driving around here just to look at all the damage and stuff like that. I haven't seen anybody get out of the cars to check on headstones or anything like that," said Baker.