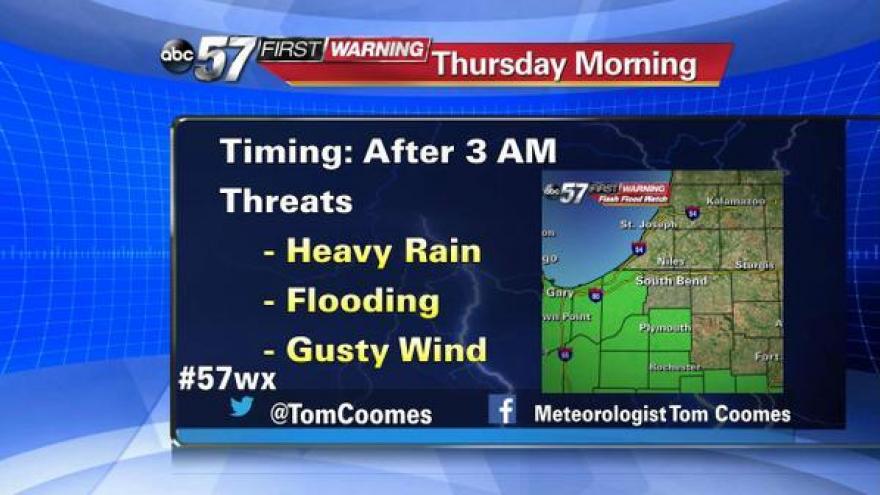 4:30 PM WED Update: Latest model runs only confirming heavy rain threat for Thursday morning. Rainfall estimates range from a half inch or less in the northeast to over one or two inches in the southwest (Fig 2). The greatest risk for flooding is along and south of US-30, in the area included under the Flash Flood Watch (Green). This includes Plymouth, Winamac and Rochester areas that have already been hit hard by flooding and prone to more or similar flooding experienced earlier in the month.

Flooding or not, many will be woken up by loud storms with heavy rain, Forecast Track brings in the heavy rain and storms starting around 5 AM ( Fig 4).

There is a severe risk is gusty wind with some of these storms. The expected arrival in the early morning will keep the highest threat for severe weather far to the west (Fig 1).  -- Tom

The next round of stormy weather will hit late Wednesday night into early Thursday morning.  As with most severe weather set-ups, timing is key. As of Tuesday evening, models continue to show storms arriving after 10 p.m. The later arrival reduces the severe threat, putting Michiana on the eastern fringe of moderate (3/5) Threat Tracker severe risk (Fig 1). The farther west you live, the more likely your risk is for severe weather, this holds most true for areas of central Illinois.

The greater concern at this time, at least for most or Michiana is not severe weather, but heavy rain. Latest estimates through Thursday evening show one to two inches of rainfall, most of that falling during the early morning hours of Thursday (Fig 2). This could easily lead to street flooding, standing water or more prolonged flooding in areas that still have standing water.

Stay weather aware and check the forecast by evening, an earlier arrive of storms would raise our severe risk, especially straight line wind.