Stranger danger in a Middlebury neighborhood, parents are now worried 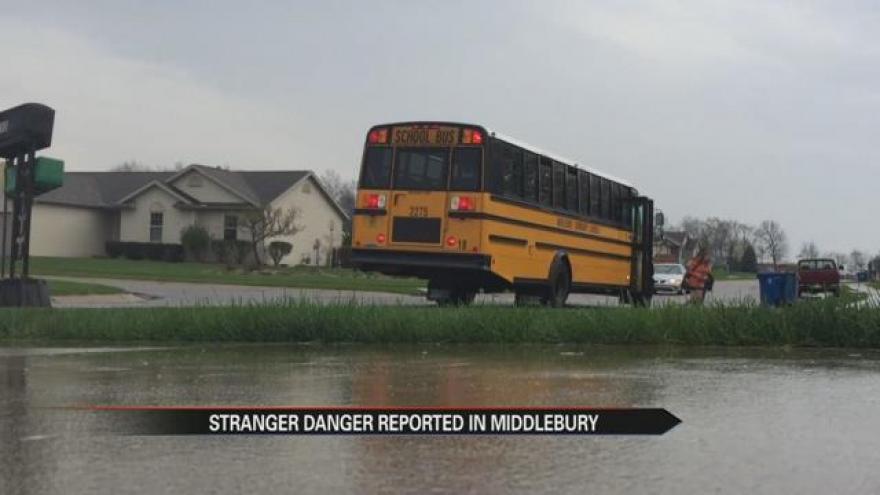 Police and parents are on high alert in Middlebury after hearing a man went up to a student after school on Tuesday, asked a boy to get into his car, then drove off.

ABC57 was able to get contact with the mother whose son was approached. She says he’s scared to get off the bus now.

According to the mother, the man is driving in a black Toyota car with an “In God We Trust” plate.

“A few people on the bus were talking about it. That’s one of the reasons I heard it. It makes me feel nervous to get off the bus,” she says.

And as soon as Jones found out about the news, she was fearful of what could happen next.

According to a Facebook post, shared by both the Elkhart County Sheriff’s Department and the Middlebury Police Department, a stranger is driving around.

“Yesterday my mom me that this guy tried to take a kid. He drove down the street right there,” says Jones.

On Tuesday, just before 3 p.m. a child was approached by a man described as large, bald, with a short black beard.

“He tried to ask him to get in his car and the kid said no, ran to his mom and the mom called the police,” said Jones.

One mom shared that her daughter texted her to wait for her after school Wednesday because she was scared to get off the bus.

Multiple patrol cars are driving around the area making sure everyone is safe.

The driver was last seen wearing a brown shirt with camo print and blue jeans.  Anyone with information is encouraged to call Middlebury PD or the sheriff’s department.