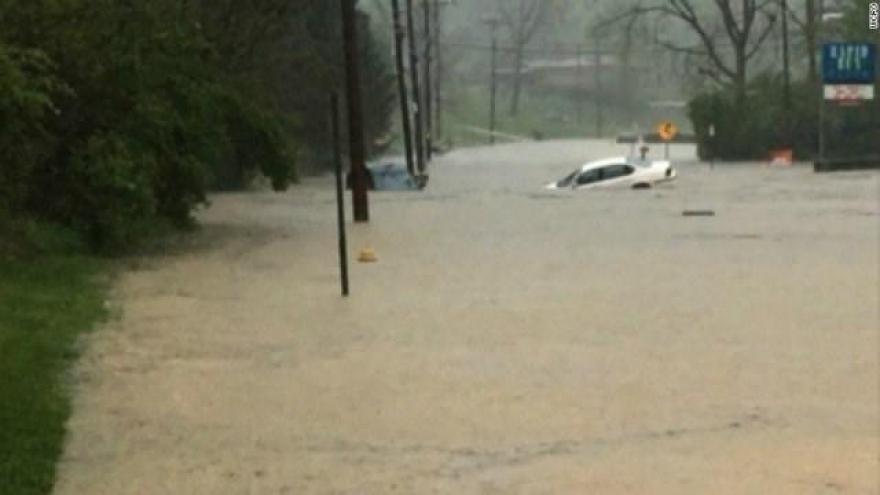 Delhi Township, OH -- One family was counting their blessings after a stranger helped rescue their baby from flood waters on Easter Sunday.

Coleman and Abby Flynn were headed back to Nashville after spending Easter weekend with their family. But before they got very far, it started pouring rain.

"There were a lot of puddles that we had to drive through." Coleman Flynn said.

But on the next puddle along Rapid Run Road, the car stalled out.

"I tried to start it multiple times, start it back up, and it wouldn't start," Coleman said.

He opened the car door, and water came rushing in.

"That's when we realized there was a problem," Coleman said.

Their 5-week-old baby was in the backseat.

"I literally was like, 'I don't really care what happens to use, we just have to get the baby out of the car,'" Abby Flynn said.

Then she noticed a woman, a complete stranger who wanted to help. They were able to turn the batter on and off to get the window down. They collapsed the car seat and pushed the baby out the window to the stranger.

Several people were calling 911 while the woman ran the boy to safety and then went back down to help the couple out.

"We also had to get out the passenger window because we couldn't open the doors of the car," Coleman said.

The couple got the stranger's first name, but in all the craziness, they didn't get to properly thank her.

"I don't even want to think about where we would be if she hadn't been willing to help people she didn't even know," Abby said.

The car was destroyed.

The Flynn family was headed back to Nashville Monday night with a rental car.

The woman who helped them was Sandra Patterson. She was on her way to the store when the deep water on Rapid Run Road forced her off into a LaRosa's parking lot.

"I have never seen a road flood like that," she said. "It looked like the Ohio River."

When she saw what was happening to the Flynn family, she ran down to help them get the baby out.

"I jumped out on the wall and put him in my car, and then I went back for them," she said.

"It's nothing that I would normally do, but just something told me to go down there," she said. "I went out and did what I hope somebody would do for me if it was me and my family."