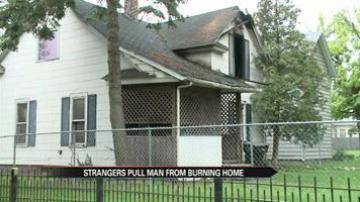 SOUTH BEND, Ind. -- A resident on Leer Street was saved by two strangers when his house caught fire late Tuesday night. The victim has only one leg and was on the second floor when two people ran in and brought him out of the house.

He was unconscious and had to be resuscitated. He is in critical condition in a Fort Wayne burn unit.

It was quickly approaching midnight when neighbor Daniel Dunn was torn from a restful sleep by a hammering on his front door.

"I didn't know whether it was someone trying to intrude on the house or whatever, because it's unusual," said Dunn, neighbor and friend of the victim.

Armed with his gun, Dunn peered out his windows but saw no one and was headed back to bed.

"Then I heard a woman's voice that was kind of like distress. So I unlocked my front door and stepped out onto the front porch and at that time I seen a couple people or whoever it was carrying Jim out and laid him down out here in the grass on the parkway," said Dunn.

Dunn stood by unable to help as his disabled neighbor, a man he felt as close to as a brother, was tended to by medics.

Firefighters quickly put out the fire.

The victim was critically injured with burns on his head and hands.

Firefighters say he was lucky.

"I applaud whoever pulled the victim out; they got him out and gave him a chance for survival," said Battalion Chief David Maenhout of the South Bend Fire Department.

The fire could have taken the man's life except for the strangers who risked their lives to save his.

"I don't have any idea who it was that stopped, but I think it was the greatest thing that ever happened," said Dunn.

Dunn doesn't know if his neighbor will survive, but he knows his friend has a fighting chance.

He wants to thank the people who rescued him.

"Thank you, that's the best I can say, you're great people. Anybody that takes a chance by running into a burning house to bring somebody out, you know, got to have something good about them," said Dunn.

No one seems to have the names of the people who stopped and ran into this home to help.

Many would like to thank them for saving the life of a father and friend.