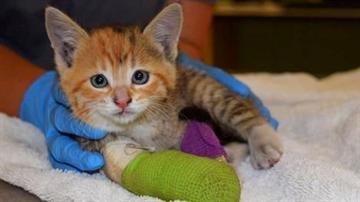 PORTLAND, Ore. (KPTV) -- A little kitten lost her leg after being trapped under a car, but rescuers say she just keeps on purring.

On June 17, a driver started a car in northeast Portland and heard a strange sound that was not coming from the engine. It was a kitten.

The driver called to report the situation and was put in touch with East Wind Animal Service, which provides help at night for Multnomah County Animal Services.

Two workers, Janna and Robbie Russell, responded to the scene. They removed a wheel from the car and spotted a tiny kitten caught by her paw in the brakes.

They unbolted the brakes to release the pressure on the cat's paw. The animal was then taken to DoveLewis for treatment of extensive injuries to her right front leg and paw.

The kitten had lost a lot of skin and the damage went deep into her tissue.

Veterinarians couldn't repair the damage that had been done and the kitten's leg was amputated.

Workers said the little girl hasn't missed a step with three legs. They named her Dove and said she purrs every time you touch her and acts like she doesn't even know her leg is missing.

"Her foster family says she's a little spitfire, runs around and definitely doesn't know she's any differently able than any other kitties," said Heather Svoboda, with the Cat Adoption Team.

Dove was transferred to the Cat Adoption Team on Tuesday. She is currently staying with a foster parent until she is ready to be adopted.

Those interested in eventually adopting Dove can go through the pre-adoption process by contacting the Cat Adoption Team. Dove will need to be an indoor-only pet, but she does already get along well with other cats and dogs.

Dove's emergency veterinary care at DoveLewis was provided thanks to the donor-funded Stray Animal & Wildlife Program.