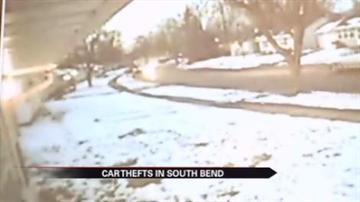 SOUTH BEND, Ind. –With the cold temperatures, many people start their cars so it’s nice and toasty on their way to work in the morning.

But the South Bend Police want to warn you not to leave your car unlocked and running, because you could end up like one man in South Bend, who left his car alone for only a minute and it was gone.

Police say the car disappeared around ten thirty and isn’t the first car that has been stolen this week.

There have been a string of car thefts in South Bend.

“There have been seven in the past week and the majority of them had started their cars to warm them up,” said Lieutenant Dan Skibins.

“I went outside and turned the truck on. I was going to go to work. I forgot my cell phone so I went inside for like thirty seconds,” said Christian Hernandez.

But when Hernandez returned, something was missing.

“Then I came out and the truck was gone,” said Hernandez.

A street crime officer spotted the suspect around six near Oak St. and Sherman.

“Both suspects got out of the vehicle and took off running,” said Skibins.

Twelve squad cars setup a perimeter and a K-9 from the county was brought in to help catch the suspects.

“We did apprehend the suspects,” said Skibins.

Hernandez says he is thankful to street crimes for bringing his Jeep home safe.

“He says he will not be warming his Jeep up unattended anytime soon.

“A lot of people do it and I learned a lesson from it you know; I need to get that auto start,” said Skibins.

One of the suspects, an 18-year-old, was transported to Saint Joseph County Jail.

The other was just 16-years-old and was transferred to the juvenile justice center.