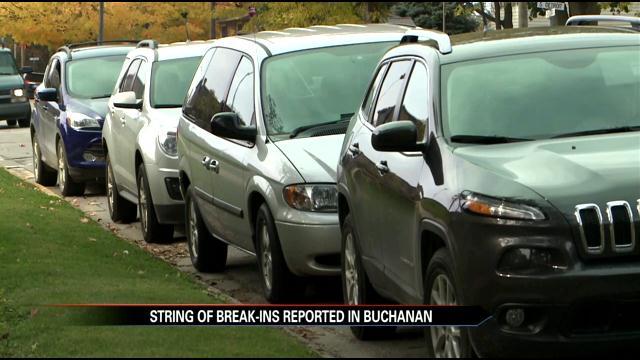 The Buchanan Police Department has received around 20 reports of car burglaries within the last couple weeks. Police say most of the victims left their cars unlocked.

Joyce Bashara is a Buchanan resident and owner of Brew Ha Ha Cafe in Niles, Michigan.

She says she feels safe enough she hasn't always locked her car doors, but last week got a big surprise.

“Between Wednesday night and Thursday morning they had gotten into my husband's SUV he parks in the driveway and our house is pretty well lit,” says Bashara.

She says the vehicle wasn't locked.

Over the past couple of weeks his department has received about 20 reports of car larcenies all sharing a common element.
“This is a crime of opportunity. These vehicles are left unlocked by the owners. The suspects are not breaking into the vehicles. They are just coming along, checking vehicles, finding unlocked vehicles, and then they are going in and taking anything of value,” says Ganus.

In addition to these thefts occurring in Buchanan, Michigan State Police say incidents have also been reported in Niles and Howard Township. All thefts have happened late at night and early in the morning.

Currently there is nothing tying these incidents together, but Ganus has strong suspicions.

“It's kind of suspicious that we are having car larcenies here and other communities at the same time so I would say that they probably will be tied together, but we have no proof to say that at this time,” says Ganus.

Ganus says most of these crimes are happening in neighborhoods and advises neighbors to be vigilant. If anyone sees something they should call their local police department.

If you become a victim of one of these larcenies make sure not to touch anything. Ganus says to first call the police because there could be evidence left behind.