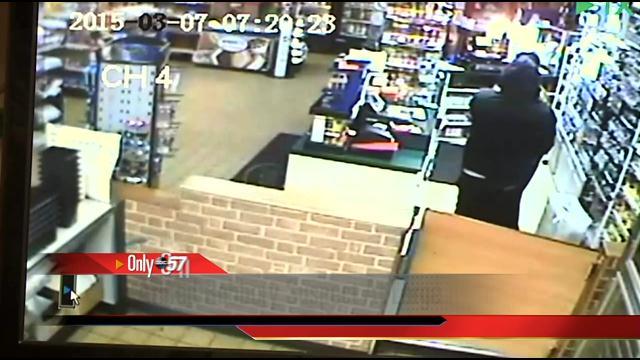 According to police, the Speedway in the 2000 block of Ireland Road, McClure Oil in the 2300 block of East Edison Road, the BP gas station in the 5300 block of West Western Avenue, and the Phillips 66 on Grape Road in Mishawaka were all robbed.

An undisclosed amount of cash was taken.

Police believe they are all connected, and according to police logs the robberies happened between midnight and 7 a.m.

In surveillance video, a suspect wearing all black and a blue mask points a handgun at the cashier in the Phillip's 66 on Grape Road. The suspect forces the gas station worker to open the register and then tells the worker to get on the floor.

Gas station workers at all four stores were too scared to go on camera, but they showed surveillance video at the Priya Lucky Express on West Western Avenue in South Bend. The suspect jumped over the counter and put the gun to the worker's head.

One man who was getting gas at McClure's said this violence has to stop.

Travis Taghon said, “I just think it's real messed up. I think something needs to be done about the community."

Taghon said he's never worked at a convenience store, but he can only imagine how terrifying that must be.

Taghon said, “I think it's real crazy that people in the community are like that. It's because of the unemployment rate and the economy.”

If you know the suspect or have any information about these four armed robberies you can call South Bend Police or Mishawaka Police.