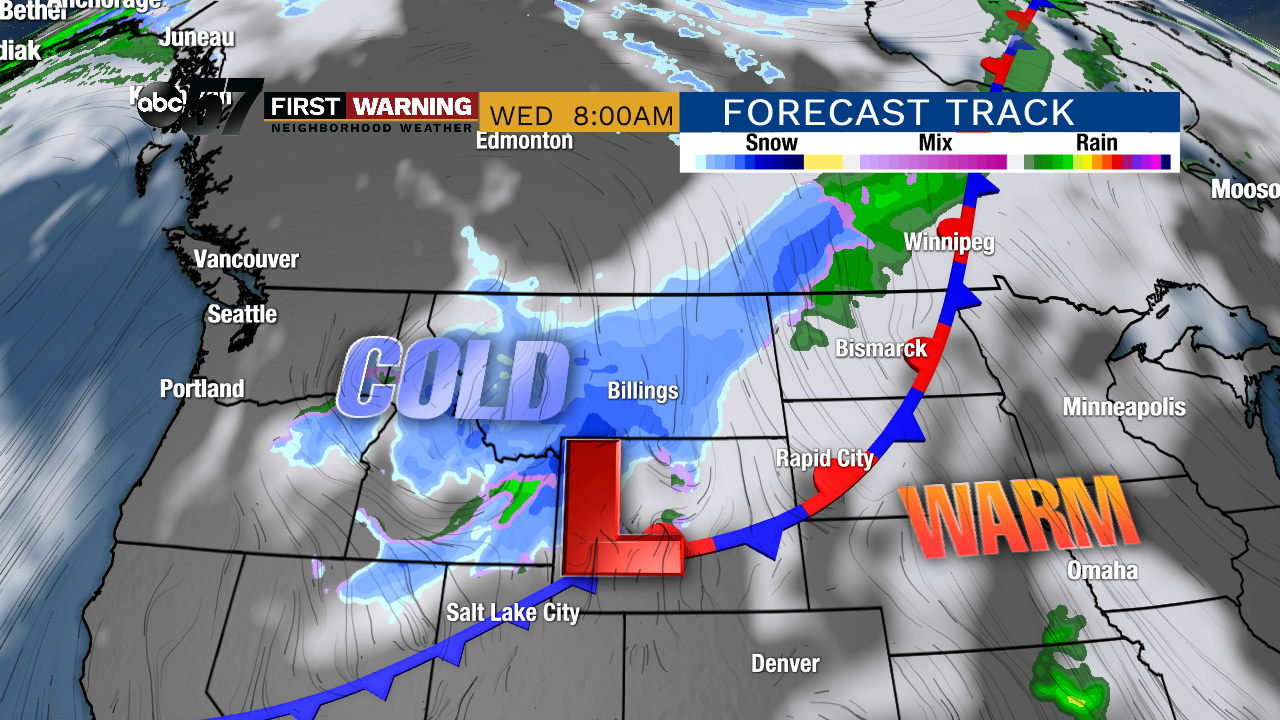 It hasn't developed quite yet as of Sunday evening, but it will quickly get its act together late in the day Tuesday in the northern Rockies. 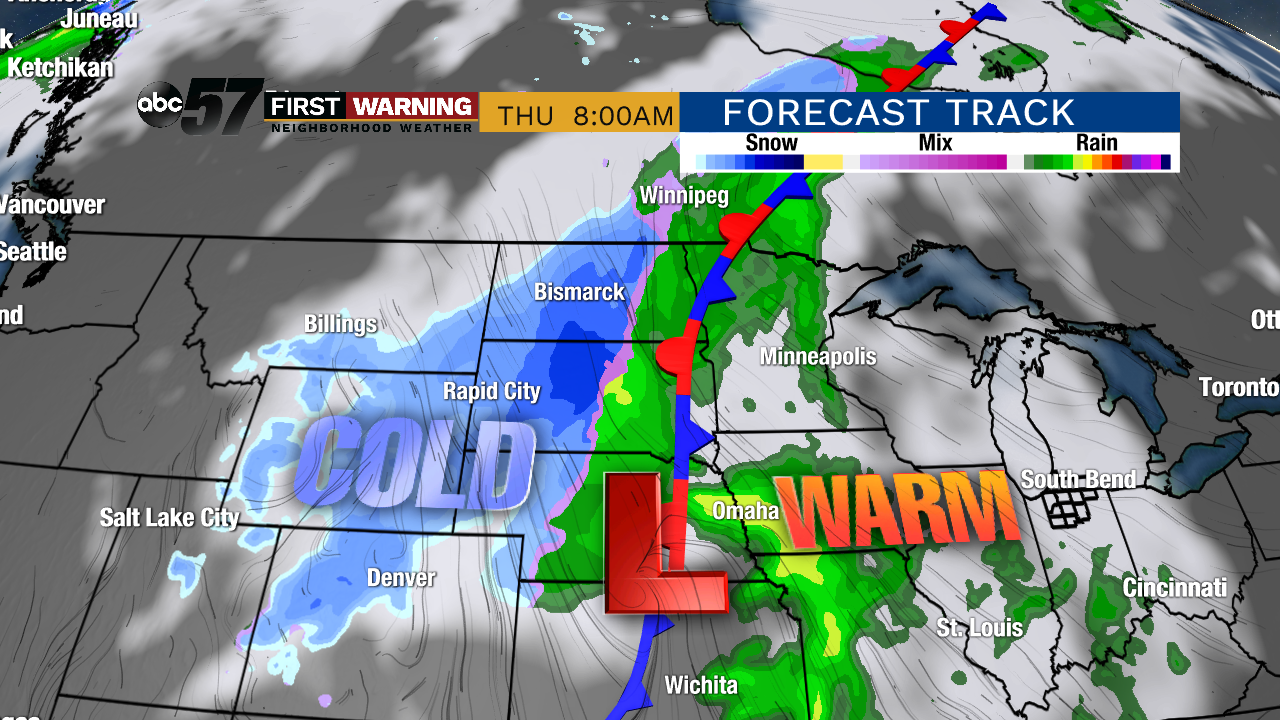 Strong storm system as of 8 a.m. Thursday.
By Wednesday morning, snow will be falling in the Rocky Mountains. By Thursday morning, the flakes will be flying in parts of Wyoming, Colorado, Nebraska, and the Dakotas. It will be quite heavy at times.

Blizzard conditions will also be possible in these states as winds pick up. 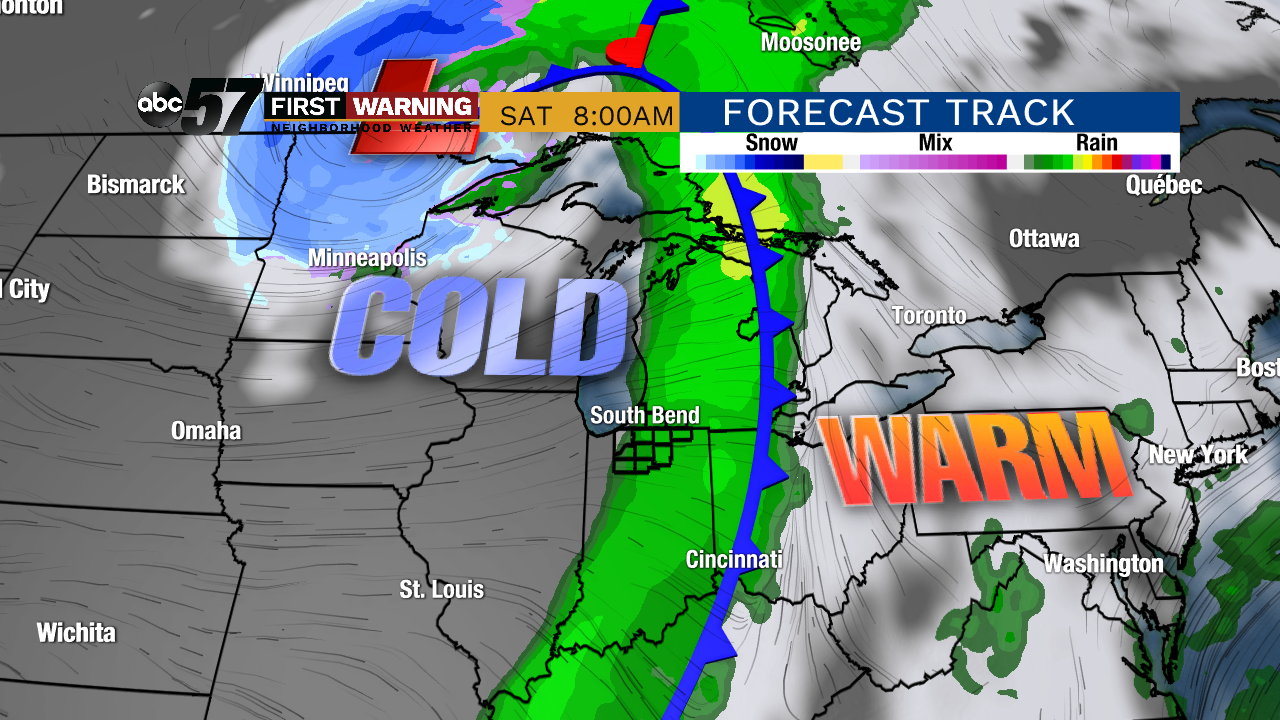 Strong system as of 8 a.m. Saturday.
The cold front associated with the potent system will swing through Michiana and the Great Lakes Friday into Saturday, bringing a round of rain and perhaps a few storms. More importantly, it will send our warm temperatures packing. 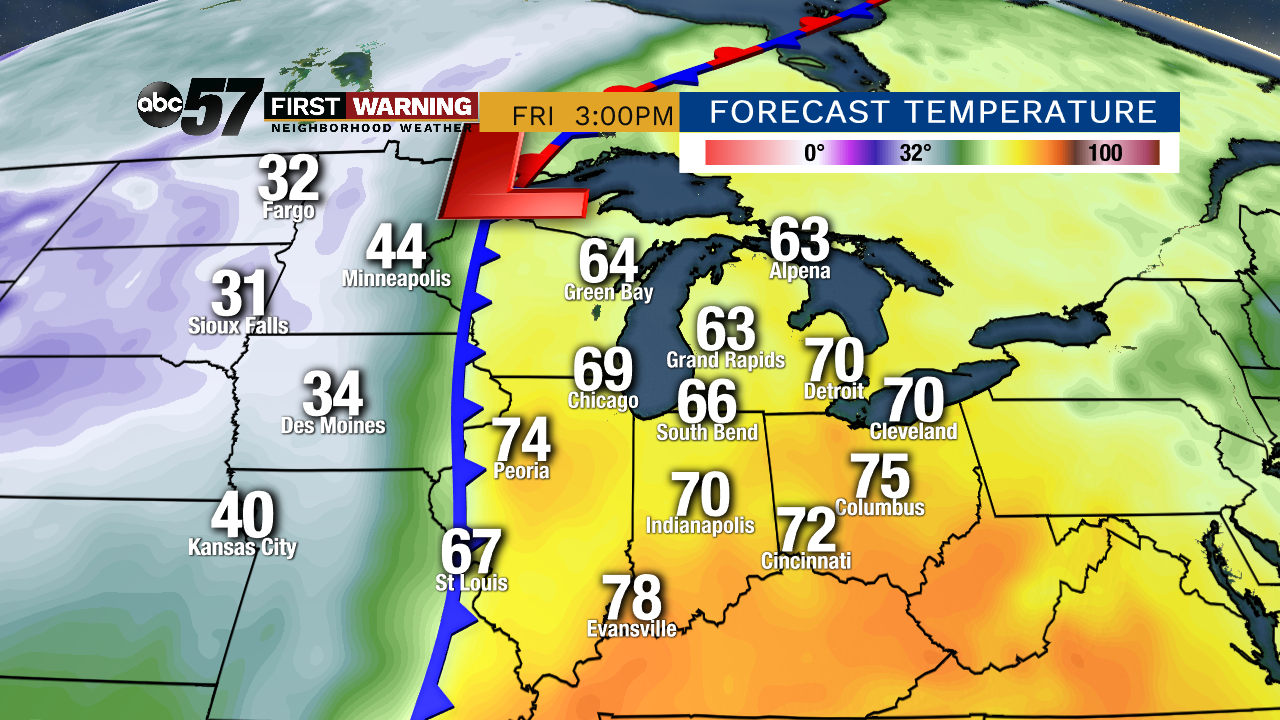 Potential temperatures at 3 p.m. Friday.
Temperatures will go from the 70s Thursday and Friday to the upper 30s by Saturday morning in Michiana. That will be a drop of 30-40 degrees in a matter of 18 hours. 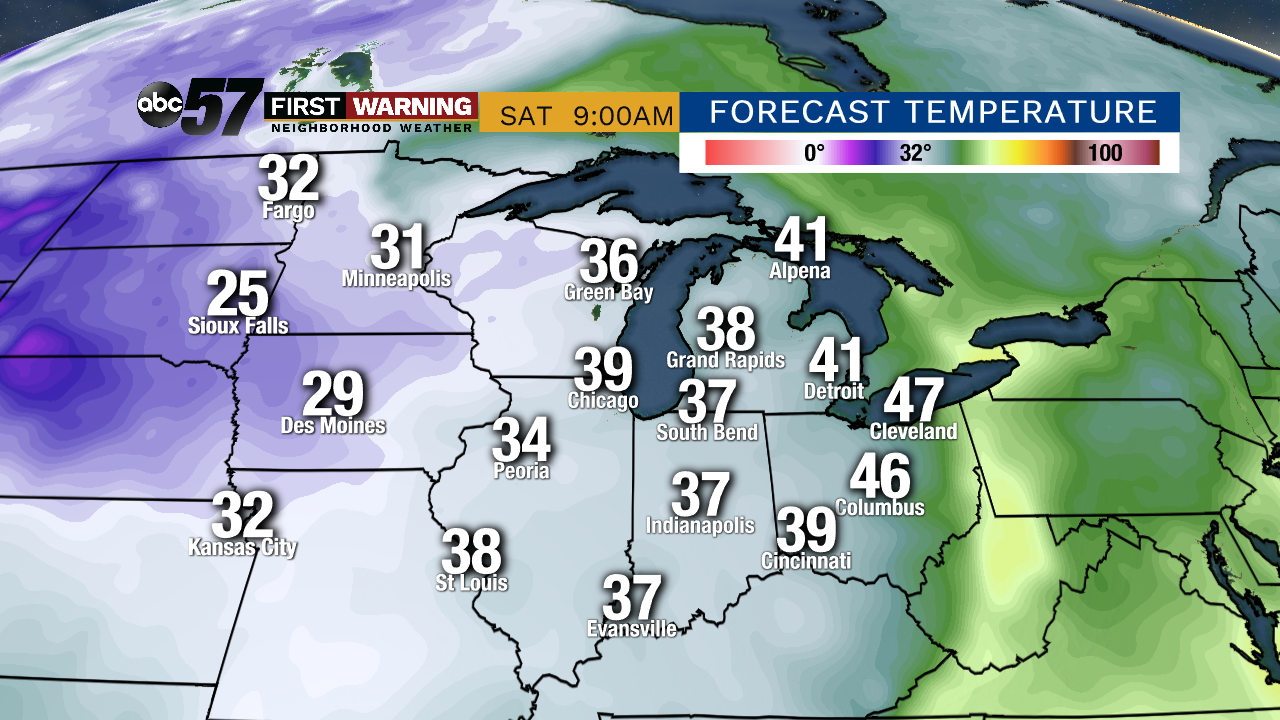 Potential temperatures at 9 a.m. Saturday.
It'll get even colder across the Northern Plains and Upper Midwest. That's where temperatures are likely to fall into the 20s and lower 30s, prompting a widespread freeze.

We won't get to the freezing mark, but frosty temperatures are a possibility. Lows next weekend will likely dip into the upper 30s with middle 30s not impossible.

It's still too early to say whether or not frost will for sure happen, but it's a distinct threat. 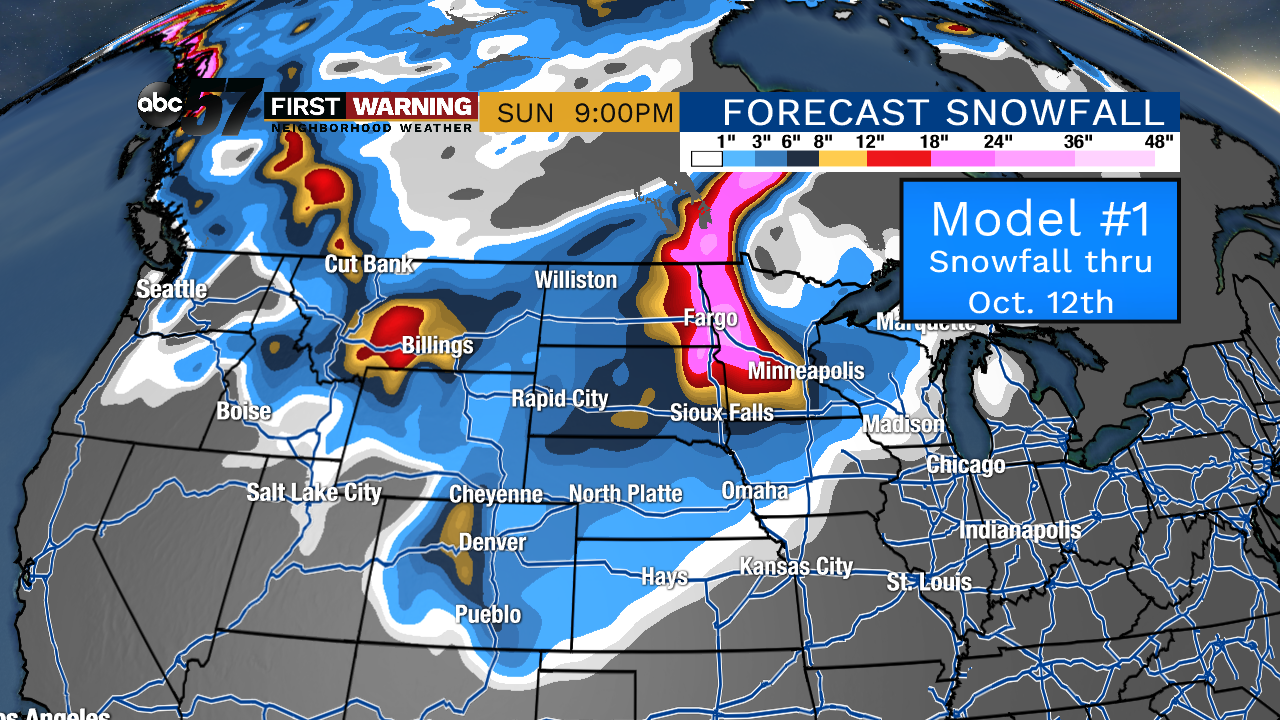 Potential snowfall thru Sunday.
While our swing in temperatures from the 70s to the 30s is significant, the bigger story will be the accumulating snow expected for about a dozen states.

It's looking increasingly likely that snow will accumulate -- perhaps quite heavily in some spots -- between Tuesday night and Saturday afternoon from Washington to Nebraska to Wisconsin. 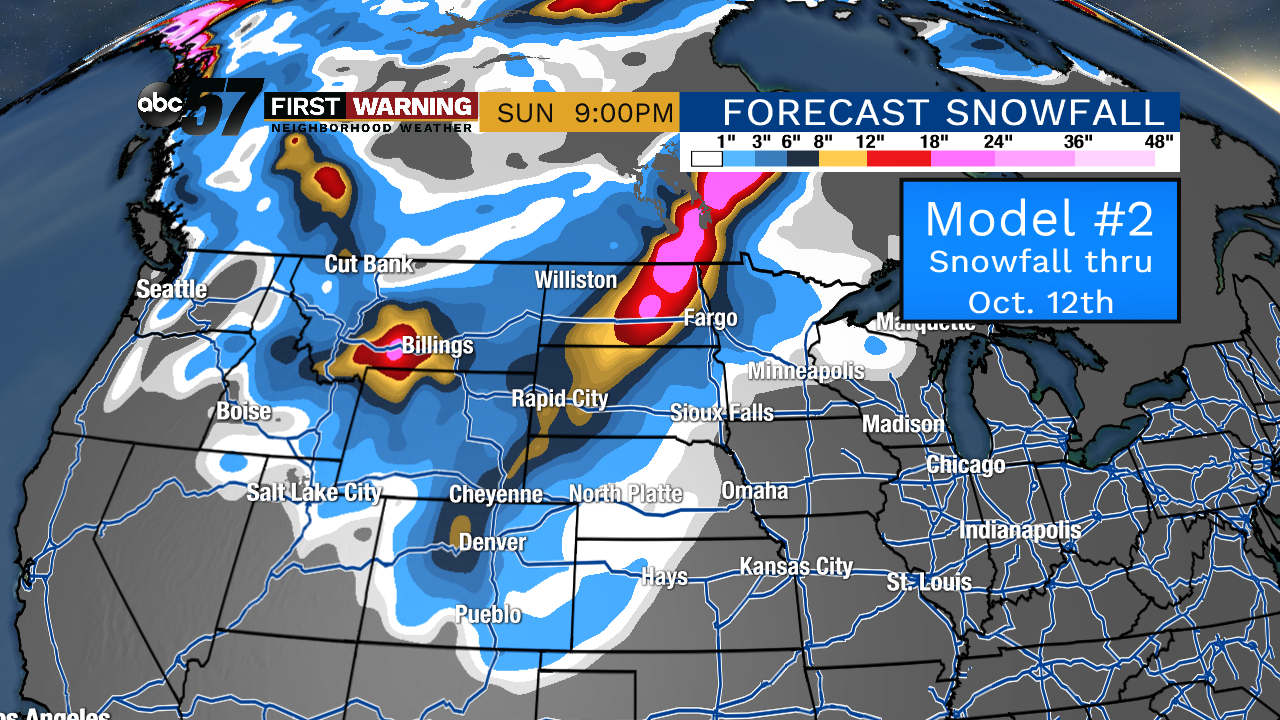 Potential snowfall by Saturday.
And the potential does exist for strong wind to combine with the snow to create blizzard conditions in several states. In all likelihood, winter weather alerts will be issued in the next couple of days for parts of the Rocky Mountains, Northern Plains and Upper Midwest.

It's still not known where the exact location of the heaviest snowfall and blizzard-like conditions will be, but the potential exists for some areas to see a foot of snow or more.