Strong winds cause tree to collapse on South Bend home 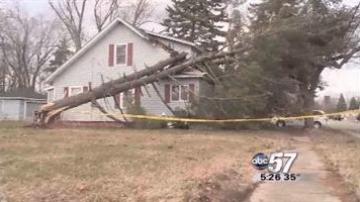 SOUTH BEND, Ind. – One South Bend family considers themselves lucky after a tree in their yard came crashing down right on top of their house.

What started out as a beautiful day quickly took a turn for the worse for the Unble Family who live off North Olive Street.

They were inside the house when they suddenly heard a loud crash that shook the entire house for several seconds.

“It was scary,” said Alexia Unble.

The giant tree collapsed under the strong winds, snapping like a twig at its base and crushed part of the roof.

The damage wasn't the only concern soon they realized the tree was sitting on the power lines coming into the house.

The tree didn't disrupt the power, but it was enough of a hazard that they were asked to leave.

“We have to leave the house and possibly stay in a hotel if it started to rain because with the power lines it becomes really dangerous,” said Unble.

For now they are staying and they do still have power, but unfortunately they will have to wait until later Thursday before AEP crews can come out and remove the tree.