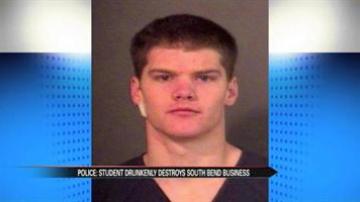 SOUTH BEND, Ind.-- Police arrested a Notre Dame student on Sunday for vandalism, underage drinking, and burglary of a local day spa. South Bend Police responded to a fire alarm at Therapeutic Indulgence and say they found a 19-year-old passed out in the kitchen.

The owner of the day spa on Jefferson Boulevard was shocked at what happened.

Sara Frazier said, “The fire alarm was going off because the oven was still on because the mac-and-cheese was still in the oven."

Brian McCurren, 19, allegedly broke into the spa by throwing a 100 pound flower pot through the door.

Frazier said there was thousands of dollars in damage to the spa.

“I guess he got hungry and found his way up to the kitchen that we have as a break room and he got out mac-and-cheese and Hot Pockets that looked good and finished it off with the drumsticks that he was found passed out on," said Frazier.

“The police actually pulled it out and threw it in the sink because it was so toasted, but he was sleeping through the fire alarm and everything. He could have burned the house down. Thankfully we had someone coming in here,” Frazier said.

Therapeutic Indulgence had to cancel dozens of appointments so Disaster Response could clean up all the damage.

“He didn’t break our computer, he didn’t try to find any money, there was no theft or anything. He just looked like he was having a party,” Frazier said.

McCurren allegedly hammered through a dry wall on the porch to get in the building. He then sprayed a fire extinguisher everywhere, and somehow injured himself because there was blood on the door.

“He still had to be shaken awake by the police officers because he was so out of it. The guy didn’t remember anything. He didn’t even remember where he was at when he came downstairs,” Frazier said.

“The way I understand it, he had a grin on his face and he had no idea where he was or what he did,” Frazier said.

Charges against McCurren were still pending on Monday night.