Student files complaint against Notre Dame for expelling him 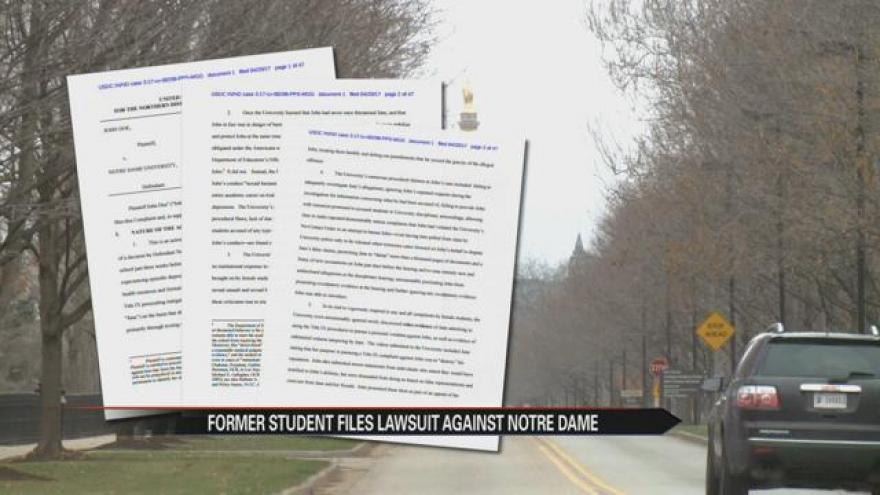 A now former Notre Dame student is taking the university to court Tuesday after alleging that they unfairly kicked him out of the university weeks before graduation. His ex-girlfriend claims he harassed her; while he says he was just seeking help for his suicidal thoughts.

In a 47 page complaint, he argues that throughout the investigation into the dating violence allegations, he wasn’t given a fair shot at defending himself against his ex-girlfriend’s accusations.

Now, it could determine his future.

In this case, the university has to balance its responsibility to protect victims of dating violence and accommodate those with disabilities.

“Sometimes those two obligations can be in conflict with each other,” said South Bend attorney, Ed Sullivan.

That’s exactly what happened at Notre Dame this year.

The university kicked out a male student weeks before graduation, after his ex-girlfriend alleged that he was harassing her with constant text messages describing his suicidal thoughts.

Psychological struggles are considered a disability.

That student has now filed a complaint against Notre Dame, alleging that he was not treated justly.

“What could be precedent setting about this set of circumstances is how to handle if one of the students has a recognized disability, and the university has a duty to accommodate that disability…and that rubs up against the university’s responsibility to ensure that they’re protecting other students from sexual harassment…where do you draw the line when both those things are true?” said Sullivan.

The plaintiff, who is referred to in the complaint as John Doe, alleges the university drew the line **through** protecting him.

When a student reports sexual harassment to the university, the Title IX coordinator is required to respond to that report, usually through an investigation, which Notre Dame promises will be ‘prompt, fair, and impartial’ according to its standards of conduct.

John Doe alleges that did not happen.

He claims his assigned Resource Coordinator, who is required by the university’s policy to “identify, explain, and navigate” support services, was unresponsive.

He says he didn’t have adequate time to review the evidence his ex-girlfriend, Jane Roe, presented to the hearing panel, which he claims was incomplete, and he says the panel ignored cell phone video he brought to them as part of a case review that shows jane saying she did this to make sure he never has a social life.

Throughout the process, the business major says he was seeing a university therapist for depression and suicidal thoughts.

She even vouched for him during the investigation, submitting a letter saying he “has indicated a clear understanding that his communication with his ex-girlfriend in the fall was not a healthy way to seek emotional support.”

“It’s very difficult, because it becomes a he said she said, but in the end, the university has to believe somebody, and that has to be on the basis of evidence, and it has to be based on a process that is fair and accurate,” said attorney Ed Sullivan.

In the complaint, the male student says he’s also concerned about his current job offer being rescinded if the university denies his request to finish out his degree.

The hearing will take place tomorrow at the U.S. District Court in Hammond at 3 pm.

ABC 57 plans to attend, so check back in Tuesday night for updates.