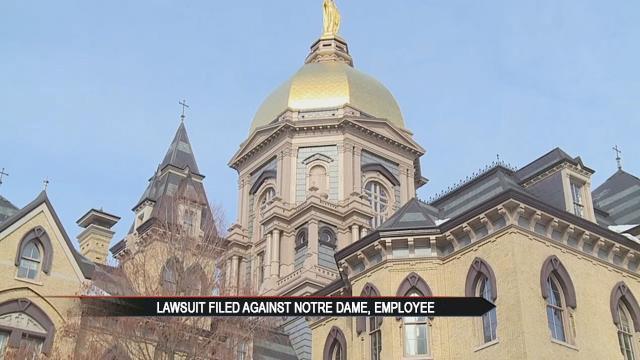 An unnamed student has filed a lawsuit against the University of Notre Dame and an unnamed employee of the university alleging racial discrimination and sexual harassment. The university says it received a complaint about an employee and that employee was terminated after an investigation. It says the allegations in the lawsuit are unfounded.

The lawsuit was filed in St. Joseph County October 30th.

The suit was brought by an African American student who alleges an employee pressured him to have a sexual relationship with the employee's daughter.

"We last week filed a lawsuit on behalf of a student, as a result of this rather bizarre relationship he was coerced into participating in," the student's attorney, Peter Agostino said.

In the suit, the plaintiff alleges the employee encouraged the plaintiff to have sex with her own daughter, then interrogated John Doe about those activities.

His attorney says there are text messages and other evidence to back this up.

He also alleges she pressured him to stay in the relationship against his will.

"This is a real person who was damaged by this, who felt pressured and got involved in something that they probably wouldn’t have had they not been pressured by someone that they were looking up to in a position of authority," Agostino said.

The suit alleges the employee used her position to engage in routine and targeted sexual activities against other African American male students, including members of the football and basketball teams.

The plaintiff also alleges the employee convinced him to receive counseling and that person was a friend and confidant of the defendant, and they sought to medicate John Doe to keep him quiet.

Finally, he alleges the employee pressured him to convert to Catholicism against his will.

The plaintiff says these allegations were brought to the university, but it failed to remedy the situation.

He alleges he was discriminated based on his race in violation of Title VI. Title VI prohibits educational institutions that receive federal funds from discriminating based on race.

The plaintiff also alleges he was sexually harassed, a violation of Title IX, which prohibits educational institutions that receive federal funds from discriminating based on sex.

The third count is for tort of outrage, alleging the behavior towards the plaintiff was extreme and outrageous and it intentionally or recklessly caused the plaintiff to suffer emotional distress.

The fourth allegation is of negligence, that the university failed to provide the same opportunities and educational environment to the plaintiff as was provided to other students.

The final allegation is breach of contract. The plaintiff alleges he was not afforded the same opportunities and educational environment as other students.

The plaintiff is also asking for injunctive relief so the student's academic environment, scholarship and financial aid are maintained and for an independent body to investigate.

A student complained about the conduct of an employee. Notre Dame investigated the complaint and subsequently terminated the employee. Thereafter a lawyer for the student filed suit for money damages

Let me caution you that  allegations were brought by a student, a non student-athlete alone.There are no allegations by student athletes in football, basketball, or otherwise. The New York Daily News is flatly wrong is this regard.

As I've said, allegations against the University of Notre Dame in the complaint are unfounded, as are gratuitous and unfounded references to "student athletes" -- an allegation that is nothing more than cynical attempt to attract publicity

However, the plaintiff's attorneys disagree with the University's statement.

"We think that the statement that’s being issued by Mr. Browne is not well informed. It’s not accurate, and it’s duplicitous," Agostino said.