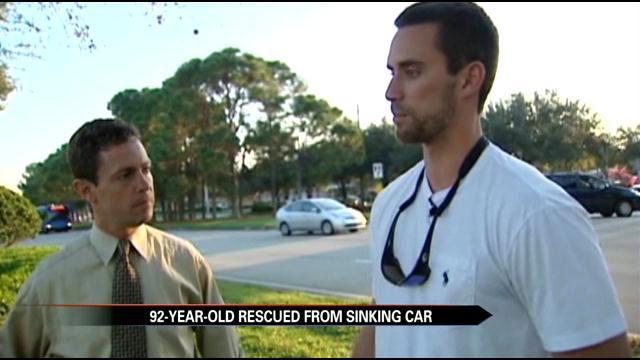 The dramatic rescue of an elderly man from his sinking car was caught on cell phone video.

Around 1 p.m. Wednesday, a 92-year-old man lost control of his vehicle and drove into a lake.

College student Alton Brieske was eating his lunch across the street and watched the situation unfold.

Brieske then swam to the vehicle, discovered the driver was unconscious, and busted open one of the widows with a hammer.

“Broke the window, popped the lock, opened the door, and that's when the water started rushing in, so I just acted fast and popped his seatbelt too, put my arm under his shoulder, and got him out of the car," said Brieske.

The man wasn't breathing so when Brieske got him to shore, he started CPR - and brought the man back to life.

"People are saying ‘Oh my God, you're a hero,' and I'm not a hero. That was my calling for today: to save this guy. I was just in the right place at the right time,” says Brieske.