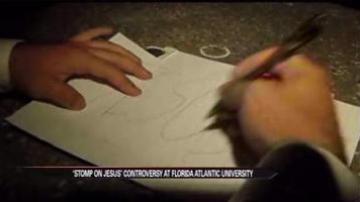 TALLAHASSEE, Fla. — The governor of Florida is demanding answers from Florida Atlantic University over what one student calls an offensive classroom assignment.

The student says his professor told his class to write Jesus on a piece of paper and then stomp on it.

He says he was suspended from the class after he went to the instructor's supervisor to discuss his concerns.

A non-profit law firm in Texas is offering him legal help if he decides to pursue legal action against the school and the instructor.

"I'm not going to be sitting in a class having my religious rights desecrated," said Ryan Rotela. "If you were to stomp on the word Jeesus, it says the word has no value."

Florida Governor Rick Scott sent a letter to the university, which read, in part: "The professor's lesson was offensive, and even intolerant to Christians and those of all faiths."