Student taking a stand for her guinea pig 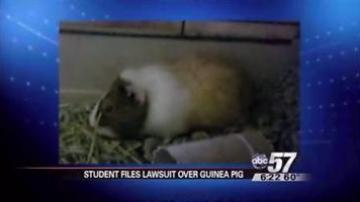 GRAND RAPIDS, Mich.-- A college student is taking a stand, for her guinea pig. Kendra Velzan, 28, is a sophomore at Grand Valley State.

Velzan has a pace maker and suffers from severe depression.

She claims that she needs the rodent for emotional support.

The problem is, Velzan lives in a pet-free dorm room.

The university refused her request, since the guinea pig is not a trained service animal.

Velzan has filed a lawsuit that Grand Valley State refused to comment on.

Right now the guinea pig is temporarily being allowed to stay in the dorms.