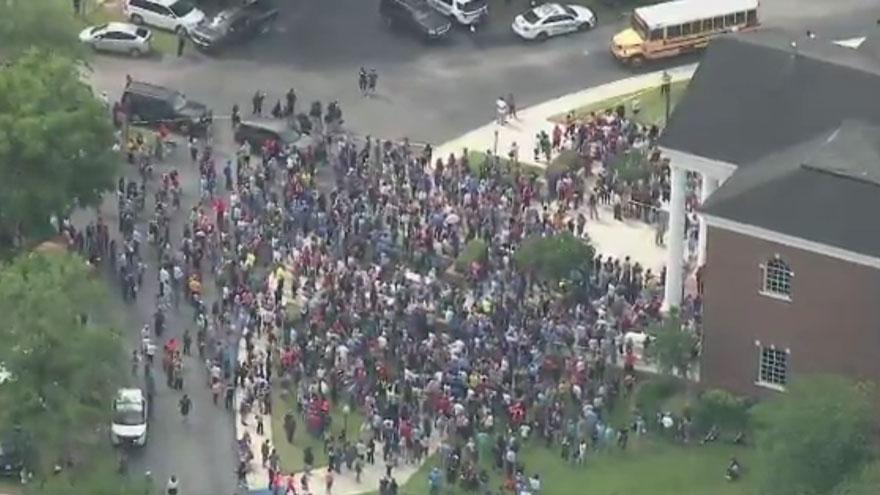 (CNN) -- A student was wounded after a shooting Friday morning at a high school in Ocala, Florida, the Marion County Sheriff's Office said, shortly before students were to walk out as part of a national protest against gun violence.

The student was shot in the ankle and transported to a hospital with a wound not considered life threatening, said Kevin Christian, Marion Public Schools spokesman.

A suspect was taken into custody in what's the 20th US school shooting this year.

Authorities asked residents to avoid the area of Forest High School, which was surrounded by emergency vehicles and buses transporting students away from the scene.

As Forest High students were being bused to First Baptist Church of Ocala to be reunited with their parents, students at some 2,500 schools around the country were walking out of their classrooms as part of the National School Walkout against gun violence.

"The fact that it happened on this day, in a way, reinforces what we are trying to get across," said Ryan Servaites, a high school freshman in Parkland, Florida, where 17 students and teachers were gunned down in February. "This happens. It is an issue. We see more people dying. Children are being hurt."

Instead, aerial news footage from the scene showed a sea of students gathered outside a steepled church to meet their parents and officers, guns at their side, clearing buildings on the sprawling Ocala campus.

School walkouts were canceled districtwide in Marion County after the shooting, according to school board member Nancy Stacy.

The Ocala shooting comes more than two months since the massacre at Marjory Stoneman Douglas High School in Parkland near Fort Lauderdale. Parkland students are participating in the national walkout -- which is also the 19th anniversary of the shooting deaths of 13 people at Columbine High School in Colorado.

"We won't stop," Servaites told CNN. "This is why. It is, in a way, the world slapping us in the face, but we just have to look at it as a wake-up call."

Forest High, which was ranked as one of the best high schools in the nation by U.S. News & World Report, has about 2,100 students. Ocala is about 65 miles northwest of Orlando.