Students create tech to aid those with disabilities 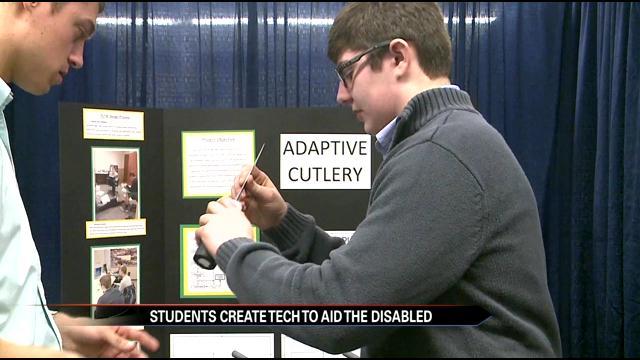 Some students in Michiana are hoping to make life a little bit easier for those with cognitive disabilities. On Saturday March 28th, ADEC held their first technology challenge and ten student groups from local high schools and even Notre Dame competed against each other.

Projects like a hands free table saw, a media center that surfs the web at the touch of a button, and even a simple pencil holder are examples of the new technology students hope will one day be replicated to be used by people with cognitive disabilities.

“We have just seen a big need for creating independence for people with cognitive disabilities through technology,” says Don Wierenga, Director of Habilitation Services and Assistive Technology at ADEC.

ADEC is a nonprofit organization that serves those with developmental and cognitive disorders in Elkhart and St. Joseph County.

“Whether it be getting a glass of water or helping them do wood working, operate a TV, surf the internet, it opens whole new doors for them,” explains Wierenga.

Wierenga's hopes for today's event include helping people like Diana Botts, whose 10-year-old grandson is diagnosed with autism.

“I'd like to maybe get one of those because it holds that pencil just the way you are supposed to or paintbrush or crayon and it will make it easier for him,” says Botts.

Botts is refereeing to the simple pencil holder designed to help those who struggle with fine motor skills.

Carson Deal a freshman at Northridge High School also created a utensil accessory for those who can't grip smaller objects.

“We kind of take that for granted, ya know eating it's something we do every day but some people just can't,” says Deal.

While all the projects were displayed judges like John Dickerson, Executive Director Arc of Indiana, deliberated on a winner and took note of the compassion displayed by the young inventors.

“From freshman in high school all the way to college seniors, thinking about, how can we make life better for folks? It is one of the most amazing things I have seen in the last 15 years of a local community coming together and really stretching the imagination,” says Dickerson.

Three teams placed and took home prizes including a 3D printer and an injection mold system. Third place went to the automated table saw, second place to the utensil accessory, and first place to Notre Dame Students and their simple use media center.