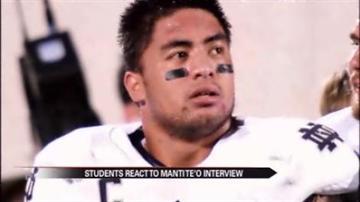 NOTRE DAME, Ind. -- It's a love story that first captured the hearts of Michiana and now it has people thinking twice about relationships, especially those that start online.

Thursday, Manti Te'o set the record straight with Katie Couric during an hour long on-camera interview. Te'o answered all of Couric's questions about the girlfriend he never had and thought had died.

Now, many are wondering if that interview helped repair te'o's image or hurt it even more.

Since the details of the elaborate hoax surfaced, there's been a cloud of suspicion around Te'o and what role he played in the whole scheme.

Many students and fans felt the the story was so bizarre it was impossible for Manti Te'o not to be involved.

But now after watching Te'o's candid sit down interview with Couric, students say they're sure he was not in on the conspiracy.

"I do feel sorry for him, I mean he is being publicly shamed," said Senior Trevor Plescia.

Thursday, Te'o sat down with Couric to set the record straight about his fake girlfriend and whether he was involved in the elaborate scheme.

"I think, at this point, it's safe to say that he was not in on the conspiracy," said Plescia.

Students that tuned in to watch say Te'o only reinforced their beliefs that he was only a victim in a sophisticated plot to deceive him, despite how bizarre the whole thing is.

"Just hearing him talk about it yet again, I think he is just ready to move on," said senior Lex Stewart. "I believe him. I wish him the best in the NFL, I think he is ready to go."

"I think he came across as being genuine, all be it naive, but still genuine is was what I sensed," agreed Plescia.

At one point during the hour-long interview, Couric played a voicemail of Ronaiah Tuiasosopo, the man behind the hoax, posing as Te'o's fictitious girlfriend.

So, for many, this just validated how real this tall tale really was.

"I didn't understand how she [Couric] tried to turn that around on him and say he was naive for thinking that. I definitely think it sounds like a female voice," said Stewart.

Students hope the interview will bring an end to the drama for the school and for the star player now headed to the NFL.

"It's going to hurt. It's going to sting for a little while, but I think he is going to be able to move on from it. I do think he is a strong person and he will learn from what happened, at least I hope he does," said Plescia.

There is no way to know just yet how this whole thing could affect Te'o's position in the NFL draft or future endorsements, but we will find out more when the draft kicks off April 25th.