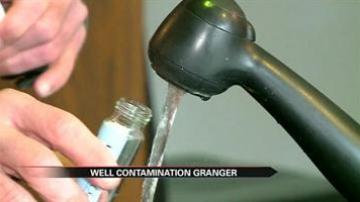 GRANGER, IN -- The St. Joseph County Health Department has released the results from a year-long study of the water in Granger.  Findings show that nitrate levels in some of the area's wells are 8 times higher than what is found in South Bend city water.

Nitrate can be caused by the body's natural breakdown of its organic matter, but when consumed in excessive amounts, it can be dangerous to your health.

Results show that this nitrate found in the water, can only lead to one conclusion, that the area's water is being contaminated by septic waste.

"Approximately 40-percent of the homes in Granger have levels of nitrate that we feel are too high and are approaching a level that people should be concerned, or quite concerned about," says Marc Nelson, the Environmental Health Director for St. Joseph County.

The health department also detected signs of pharmaceuticals in the water.

"We didn't expect to find pharmaceuticals as prevalently as we found them," said Nelson. "The pharmaceuticals mean people are consuming them and it's going through their bodies and into the septic system, and then into the ground water."

It's something everyone, even the healthiest of residents, need to be concerned about.

Until the health department can correct this issue, they're advising residents to get their water tested for nitrate levels.

If levels are found high, contact the health department and they will give some guidance.

St. Joseph County Health Department will meet again in January to discuss the best options in making the water safer for Granger residents.