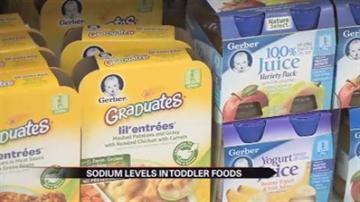 SOUTH BEND, Ind.-- A recent study from the American Heart Association says 75-percent of tested pre-packaged toddler food has too much sodium.

April Landes says she's a pretty health conscious mom. Proof: we caught up with her at the CrossFit South Bend gym. She works hard to give her daughter Zophia healthy food, but its not always easy.

"Well I think there's definitely days where you count it as a win if you can get her to eat anything at all," said April Landes, mother of two. "I think all parents feel that way."

Pediatrician Maged Ibrahim says it's used for taste and as a preservative. But it does more harm than you'd think.

"If you develop a taste for salty food, as you get older that's the kind of thing you're gonna eat," said Dr. Ibrahim.

Researchers looked at over 1,000 food products for babies and toddlers. Products containing more than 210 milligrams per serving were considered too high in sodium.

"The higher the amount of salt intake that the child has, has an effect on the blood pressure," said Dr. Ibrahim.

And it can lead to heart problems as an adult. That's why Landes says she and her husband changed their eating habits.

"Because of the way we eat at home, we don't have a lot of prepackaged foods anyway," said Landes. "So if Zoe were to ask--she would never be asking for crackers or cookies or things cause it's not in the house."

Landes says if you don't put the sodium-rich foods in the shopping cart-- kids will stop asking for them. And Zophia will be healthier as an adult, by eating well as a toddler.

"Obviously convenience is important-but it's just as convenient to get her apples or grapes or something like that than it is to buy something that's specifically targeted for children and generally more expensive anyway," said Landes.