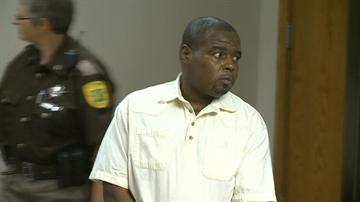 ST. JOSEPH COUNTY, Ind. – Terry Sturgis’s 14 year-old and 9 year-old sons took the stand to testify against him on Friday. Sturgis is facing 14 counts, one of which is the death of his 10 year-old son Tramelle.

The two boys relived the night and early morning they were beaten and their brother died last November in the courtroom on Friday.

The 14 year-old said once he knew his dad got word of him stealing pencils from school last November, he got very nervous about what could happen.

"I got real nervous and I feel my insides, my heart started to beat real fast," remembered the boy.

He said when his dad got home, he consulted with his grandmother over what the school said, and then he came down to the basement where they lived on West Washington Street to give the boy his punishment.

That night he said his dad came home with a stick and a roll of duct tape.

"You think this is a game? Me and my stick are going to have some fun," the boy quoted his dad in the courtroom.

He said his dad wrapped the end of the stick with tape, and had him bend over a crate. Then he had him "pull my pants down and was beating me on my butt," said the boy.

He said throughout the night he thinks his dad hit him "probably almost to fifty," but less than fifty times with the stick.

The boy said he wanted his dad to stop, so he was trying to tell on his brothers for things they had done.

He said Tramelle had stolen a bottle of water from the dad’s stash, so Sturgis turned his attention to the 10 year-old.

Then Sturgis started beating Tramelle with the same stick said the boy.

The 9 year-old also testified on Friday that he was the third child who was stuck with that same stick.

"He had started whooping us," said the 9 year-old.

The 14 year-old said his dad kept switching mainly from himself to Tramelle, and even burned the two of them with a clothing iron that the boy said was on "maximum heat."

He said his dad would take breaks during the beating, but it didn’t completely stop until his dad realized Tramelle wasn’t breathing.

He said he helped his dad perform CPR on Tramelle and the grandmother in the house called 9-1-1.

The 14 year-old said this wasn’t the first time he had injuries at the hands of his father.

The boy told the courtroom on Friday of four other times he was hurt.

Last June he said his father burned him with roach spray and tied him to a bench.

Then he said on another occasion, Sturgis heated a screw driver with a lighter and burned it into his skin.

In early September, the boy remembered stealing some chips from his siblings’ chip bags and for punishment he said his dad split his head open with the legs from a broken table.

On that day he was taken to the hospital where he got 12 stitches.

Then he recalled his very own birthday last September. He said on the stand on Friday, his dad accused him of eating the cake which had pieces missing.

He said Sturgis "rammed" his head against the wall and then threw him down the stairs to the basement where they lived.

The 14 year-old also talked about the two separate times the Department of Child Services visited his home.

He said both times he was too afraid of what might happen to him if he spoke up.

The children are now living with foster parents.

Testimony in the trial will continue on Monday morning.