Sturgis trial: "My son ain't gone because of me!" 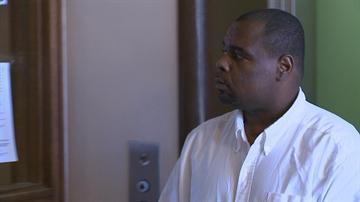 ST. JOSEPH COUNTY, Ind. – "Just another day" is how Terry Sturgis described the night before his son died to police. On Tuesday the jury heard from Sturgis for the first time during his murder trial on a video recording of his police interview. He was interviewed just a few hours after his 10 year-old son Tramelle died last November.

When first questioned about his kids Sturgis said, "they’re not bad kids" and "they know I love them to death."

On the tape Sturgis repeatedly denied responsibility for Tramelle’s death.

At one point he yelled, "My son ain’t gone because of me...that’s not at my hands."

Sturgis was breathing very heavy and grunts in frustration to many of the questions detectives ask him.

Sturgis only admitted to hitting Tramelle with a backscratcher on his butt during the video. He said "maybe five to 10 whoopings," that night for stealing a water bottle from his dad’s stash.

At one point on the tape Sturgis said about his kids, "If you don’t discipline them a little, when the grow up they’ll be out of control."

When asked about the burns on his son’s body, Sturgis repeatedly told the same story to the officers.

Police asked him about the bruises and other injures on his 10 year-old’s body. Sturgis replied Tramelle is an "active kid, runs around," and is always "playing".

Sturgis said he woke up in the middle of the night to his son at the bottom of the stairs, which he said Tramelle fell down. Then he said he gave him CPR and said to call an ambulance.

At the end of the portion of tape viewed on Tuesday, Sturgis was alone in the interview room on the phone with Tramelle’s mother.

He appeared very distraught and was crying and mumbling. It was very difficult to make out what he was saying.

During the interview he asked over and over again to talk to his mother who lived upstairs in the same house.

He told police he wanted to tell her, "I’m sorry she’s going through this."

Jurors will view the rest of the tape on Wednesday.

Two doctors also testified on Tuesday including a pediatrician and a pathologist.

The pathologist, Dr. Pamela Archuletta, performed Tramelle’s autopsy. She said the cause of death was blunt force trauma.

She listed the injuries she found on Tramelle’s body. She said both arms were fractured. Archuletta said the left arm was a new fracture and the right was at least a month old.

Tramelle also had a skull, rib, and tailbone fracture, and a number of burns, bruises, and scratches "from head to toe".

The jury will hear closing arguments on Wednesday. The prosecution and defense have each asked for an hour for those arguments.

The case will formally be turned over to the jury on Thursday morning for deliberations.