Subway preps new look for tens of thousands of stores 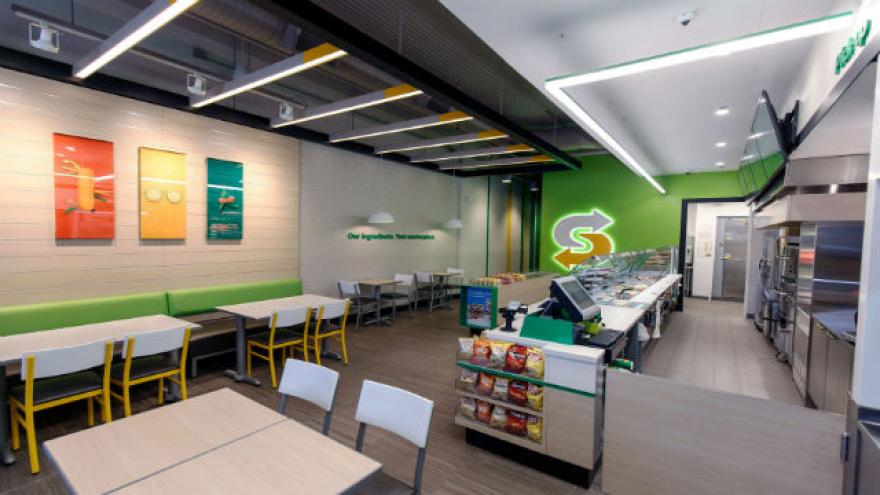 Subway restaurants, which boasts more than 40,000 locations globally, is rolling out a new look for its stores, the company announced Monday, July 17, 2017. Photo courtesy Subway

NEW YORK (CNNMoney) -- The world's largest restaurant chain is getting a makeover.

Subway restaurants, which boasts more than 40,000 locations globally, is rolling out a new look for its stores, the company announced today.

"We've created a modern design that gives our guests choices -- from how they order, to how they pick up their food, to how they enjoy their meal," said Trevor Haynes, vice president of operations at Subway.

The new design includes self-order kiosks that work with Apple Pay and Samsung Pay, and a more comfortable seating area with Wi-Fi and USB charging ports.

The stores will feature a renewed emphasis on fresh produce, too, as whole tomatoes, onions and peppers will be put on display and cut fresh at the store by the chain's "sandwich artists." Subway is also changing up the menu with new sauces and additions like pico de gallo, house-made pickles and "made-without-gluten" bread.

The company said the redesign marks the "next phase of Subway's evolution." Last year, the company unveiled a new logo after more than a decade.

The revamp comes as the fast-food sandwich company tries to recover from a lackluster 2016. Subway closed more stores than it opened in 2016 — the first time in the company's history — bringing the total to around 26,744 stores in the U.S.

The design is being piloted in 12 locations, including Florida, California, Tennessee, Texas, Oregon and Washington, domestically. The pilot also includes two stores in Quebec City, Canada and one in the UK. The first pilot restaurant opened in January this year.

A spokeswoman for the company said the goal is to eventually roll out the new design to all 44,800 Subway restaurants.

"This is a multi-year project and the transition will take time given Subway's size, but Subway is looking to get a large number of locations converted in the next couple of years."