Sugarland duo to give stage collapse depositions next week 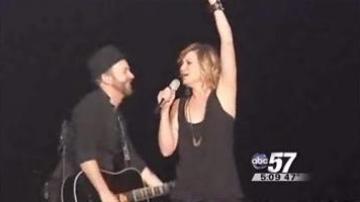 Sugarland’s Jennifer Nettles and Kristian Bush will give their depositions April 12 and 13. Testimony will focus on whether the country group resisted delaying the start of their August 13 concert despite threatening weather.

The stage and rigging collapsed onto fans, during high winds ahead of a thunderstorm. Seven people were killed and dozens more were hurt.