Summer-like temperatures in early May near record high/low 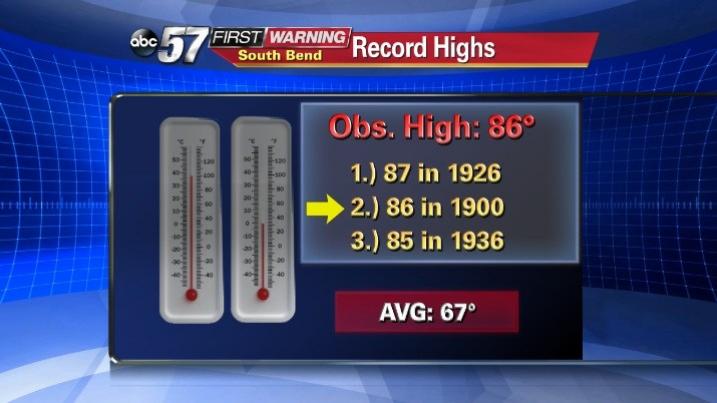 SOUTH BEND, IN - With temperatures soaring into the mid to upper 80's earlier this afternoon, not only were we taking a double take at the calendar, but we also almost broke a record.  Mid-July is when we typically see 80 degree highs in Michiana, but it's not unusual for temperatures to creep into the summer-like heat in May.  In the record books for May 7th, the record high is still held by 1926 of 87°.  Today, we came within one degree of that record with the observed high of 86° at 2:41PM at the South Bend airport.  Take a look at Fig. 1 to see the top 3 highest temperatures for this day in history.

Now looking ahead to tonight, it looks like temperatures will still remain well above normal.  The ABC57 First Warning Neighborhood Weather Team is forecasting 64° for the overnight low, but a quick look at the highest minimum temperatures for this date, we are coming within three degrees of the record 67° held by the years: 2000, 1979, and 1986 (Fig 3).