'Super-girl' helps save family from fire 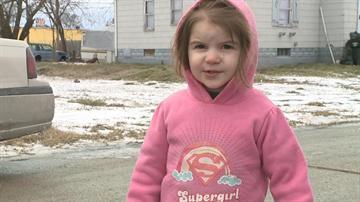 SOUTH BEND, Ind. – Three year-old Madison put on her pink ‘Supergirl’ sweatshirt out front of her home Monday afternoon. Her house went up in flames around 1 a.m. just hours earlier, and that ‘Supergirl’ logo was pretty fitting for the young girl.  Along with her brother, she came to the rescue when the fire broke out.

The kids were sleeping in the rear bedroom where the fire started. The children ran out into the living room where the parents were, and the family made it out in less than a minute.
“Kids start freaking out, ran out, said, ‘Fire!’” said dad Kenny Rogers. “So I went to the kitchen, and seen it, threw the kids out.”
The family ran across South Chicago Street to their grandma’s house.
"I was asleep and I got woke up to my son beating on my door,” said Sheila Oslar.
The grandmother said the family has owned the house since the late 50’s and she even grew up there.
“It's been in the family for five generations. It was my grandmother's house. So it was really heartbreaking to see it go up like that,” said Oslar.
Oslar said the family lost everything, and Roger said he plans to rebuild.
Just hours after the fire, the family was just happy little Madison lived up to her ‘Supergirl’ status.
"Yeah my little granddaughter Madison she was the hero. She got her little brother and ran out and told her dad it was on fire, and he got them out,” said Oslar.
Oslar said she thinks the electrical heating system is what caught fire.
Fire investigators told ABC 57 they were still investigating, but the preliminary ruling is accidental.
Share this article: