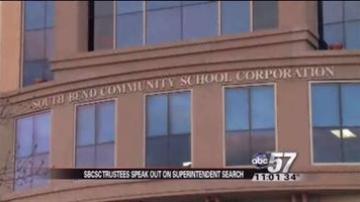 SOUTH BEND, Ind. -- One of the three finalists in the running for South Bend school superintendent dropped out today.

Now, school board members are speaking out saying this should have never happened. Members say they are upset that school board President Roger Parent made the decision without meeting or conferring with the board first.

"It was a harsh decision, it was a rash decision. Unfortunately, it was a decision that will affect a person," says senior school board member Dawn Jones.

School board President Roger Parent is said to have asked Dr. Eric King, a finalist in the job for South Bend superintendent, to withdraw from the position after an ABC 57 News investigation revealed that King had been named in a lawsuit involving a student who had said she was raped by another student at a high school in his district. A crime the victim says was not immediately reported to police.
Jones says she was surprised to hear of King's withdraw and disagrees with the way his past influenced their hiring process.
"I was looking forward to the process and I am disappointed that we didn't continue with that process".
Jones says, with the Internet, she and the other board members already knew about each of the finalists pasts, including King's. She says background checks were done by their lawyers and everything came back clean.
"No criminal activity, no wrong doing. As far as I am concerned that is good enough with me to conduct an interview! I mean, it's not like we hired anybody, we just wanted to do interviews."
Jones says she was trusting in the process, a process the board thought would lend itself to transparency.
Jones says should have been able to ask ask the finalist himself about his time in the Muncie school District.
"I sure would have, for any candidate that we have chosen to come to this level, you want to interview them. You want to know what really happened."
The two left in the running are current interim superintendent Carole Schmidt and assistant valparaiso superintendent Robert Haworth.
They will both be interviewed next week by board members and several focus groups.
Share this article: