Supermarket shooting investigation far from over 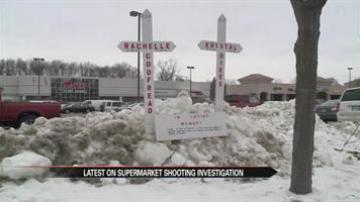 ELKHART, Ind. -- Indiana State Police say they are making headway in the investigation into why Shawn Bair allegedly killed two women at a grocery store. They say they have received hundreds of tips and interviewed dozens of people who might know something.

They say they won't be releasing any more information until the prosecutor reviews the case.

But the investigation is far from over.

"The investigation has several spokes and it's spread out all over the place right now. We've got computer forensics we are looking at, witness statements, video. Really dozens of things that we are piecing together at this point," said Trent Smith of the Indiana State Police.

ABC57 requested the 911 calls and surveillance video from the shooting, but because of the nature of the investigation, police denied the requests.

"It could do more harm than good at this point," said Smith.

Smith would not confirm Bair's family's statements that he was texting and calling his mom minutes before the shooting.

"Just because there's some family members are involved with what happened, it doesn't necessarily mean that they know the truth or what the answer is," said Smith.

Bair's family said he collected knives, but they didn't know why he had a gun.

Smith would not confirm whether Bair had any drugs or alcohol in his system at the time of the shootings.

"We do want to see if there was anything in the subject, anything going through his body at the time. To say if it's going to be huge, at this point I don't know," said Smith.

The ATF traced the gun allegedly used in the shooting and they do know who it was registered to, but would not release that information.